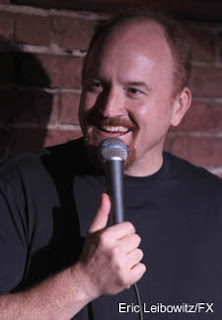 Louis C.K. is ridiculously prolific. The first season of his low-fi sitcom Louie ended last night, and he’s planning season two. He’s got a new special, Hilarious, screening tonight at the Kendall. And he’s got a whole new show ready when he comes to the Wilbur later this month.

You would think that you would recognize more material from Hilarious as premises in Louie, but no, other than a couple of random subjects, it’ll pretty much all different. Consider also that last time he was in Boston, he recorded his shows for a possible CD release (although there has been no news on that front). And there was a lot of material in that set that doesn’t wind up in Hilarious.

And just about all of it hits. Hilarious is amazingly consistent with C.K.’s previous two specials, Chewed Up and Shameless. Both of those specials were solid and inventive, and Chewed Up was a classic. Hilarious fits right in.

No comic working right now has a funnier internal logic than C.K. Most of his observations, no matter how absurd, echo someplace in your brain to make you think you may have thought exactly the same thing at one point or another and not been able to express it. The hot girl at the bar? She is three lines to C.K. – boots, skirt, and shirt. A weird seductive geometry.

Guys going out just to get laid rove in packs of nine wearing the same button-down shirts, hoping to run into nine women walking in the same formation. Technical schools, to C.K., are the places where dreams are narrowed down. “You can do eight things,” he says. “We got it narrowed down to eight for you.”

He even has his own stupidity put together in a process – he does something stupid, analyzes it, and commences with the self hatred.

One bit might seem familiar to fans who watched C.K.’s appearances on Conan, and that’s his riff on people’s impatience with technology. He expressed a lot of the same thoughts on Late Night in 2008 (see video below).

If you can’t get out to the Kendall tonight, Hilarious will be on the Epix premium cable channel on September 18. After that, it will air on Comedy Central, which will also releae the DVD, next year.
Posted by Unknown at 8:30 AM

Thanks for the update. Awesome possum.

Ah! Awesome possum. I have actually found myself wondering what that shirt looked like. Which is, in many ways, sad.