Just in time for your post-Thanksgiving leftovers Armageddon, Maria Ciampa brings you “Weighed,” a parody of the Nine Inch Nails song “Hurt.” Ciampa wrote, sung, and directed, with an assist from Calvin Swaim and Justin Carr. The star of the show is Harry Gordon, flat out one of Boston’s best comic actors and improvisers. The video is hosted on FunnyOrDie.com.

Tony and Rogerson’s show is called “700 Billion Laughs: A Bailout of Humor From Some Serious Stupidity,” and Tony is quoted in the press release saying, “Start your year by investing in some titters and watching them grow to guffaws. This will be an evening of covering our own assets, diversifying some foolishness and restructuring your hedge fun. We got your dividends, right here!”

I thought something was fishy, since Tony is not prone to “titters.” But when I checked with him be e-mail, he said, “Yup! I said it - I meant it - And I stand by it.” So there you go. A comedy guarantee from Tony V.

Chelmsford native Benari Poulten does a lot of traveling for his day job. Which might be fun, if his day job wasn’t in the U.S. Army Reserves. Poulten was assigned to Guantanamo in 2002, and he’s heading out again soon, this time to Baghdad. So if you want to see him do stand-up, he’s doing a guest spot tonight at Mottley’s Comedy Club (the headliner is Newton native Jon Fisch, with Jason Kanter and Giulia Rozzi). Friday, November 28, 8 PM. $20. Mottley’s Comedy Club, 61 Chatham Street, Boston.
Posted by Unknown at 1:09 AM 0 comments 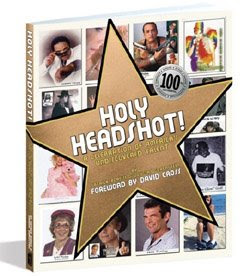 Patrick Borelli started his career in stand-up at The Comedy Studio a decade ago before moving to New York, where he works for a book publisher by day and works the stand-up clubs by night. Today, he’s back in Boston at PA’s Lounge for a “reading” of his new book, Holy Headshot: A Celebration of America’s Undiscovered Talent, which he co-wrote with Douglas Gorenstein. Essentially a collection of headshots from aspiring actors, the book provokes a lot of laughter and a bit of sad sympathy for its decidedly offbeat hopefuls. Union Square Roundtable. Friday, November 28th, 9 PM. $9. PA's Lounge, 345 Somerville Avenue in Union Square.

What possessed you to produce this book?

I've always loved looking at offbeat headshots and working with odd actors. When I first started out at the Comedy Studio in Harvard Square, I paired up with an peculiar elderly stand up named Lady B. She was in her late 60s. We would write and perform sketches together. From the very beginning of my career I was seeking out strange performers.

Do you have an honest appreciation for what these people are trying to do in their careers?

I started out in Boston which has a great comedy scene but is not the center of the entertainment industry like NY or LA is. More than half the people in Holy Headshot! live in small towns or cities throughout the US. I do appreciate that they're trying to build a career for themselves outside of LA or NY. I know how hard that is. I'm totally pulling for the folks in the book.

Did you get submissions from anyone you knew in Boston, either from the Studio or local actors?

I did not get submissions from anyone that I knew. I could have easily filled the book with Boston comedians I know like Eugene Mirman, Larry Murphy, Jen Kirkman, and Brendon Small, but that's not what I was looking for.

What, exactly, will you be doing at PA's Lounge? What are the videos you said you're showing?

I'll be showing some of my favorite headshots and resumes in Holy Headshot! I shot some short videos with some of the actors in the book. I did a basic interview with them and then asked them to perform a skill they had. Most of them performed a monologue or acted out a scene from a favorite film. I have a great video from an actor named Yenz Von Tilborg. If you combined a pirate and a hairdresser, you'd have Yenz. In his video, he performed a dramatic monologue from Dracula. All the videos are on www.holyheadshot.com.

Is what you're doing at PA's Lounge the same thing you've been doing at other book-related shows?

At PA's Lounge, I'll be doing a one-man, powerpoint presentation of my book. In NY, LA and San Francisco, we did a talent show featuring talent taken straight from the book. But since this is Thanksgiving, we were having trouble finding actors that were available to perform.

Have you gotten any responses from people included in the book?

Yes. They are ecstatic with the book. A number of them have been contacted by talent agents or have been called for auditions. Which is exactly what we were hoping for. Here's a message I just got from a Louisiana-based actor, Eric Gipson:

"I can't tell you how thrilled I am to be in the book, and to also be one of the 10 actors selected for the NPR story photos. It's a kick, an honor and a hoot! I wanted so bad to get in on the NYC and Los Angeles talent showcase action; but I may touch base with you soon about at least showing you some video samples of my lunacy, er, acting that is! How about a show in middle America or the South? THIS DOG IS STILL HUNTING!!! MY EYEBALLS ARE A-WIGGLIN, BABY!”

Seriously, I already feel like the other 102 actors in the book are my family as we continue our efforts in this bittersweet (but mostly wonderful) business. Entertaining people is my passion and I hope we can all connect one day.
Posted by Unknown at 12:08 AM 0 comments

For the past ten years, I have been covering the Boston comedy scene for The Boston Globe, The Boston Phoenix, Boston Magazine, and every outlet I could find. For seven and a half years, I wrote a regular column for the Globe following comedy, one of the only of its kind in the country. But with belts tightening across the publishing world, I have suddenly found myself without that regular outlet at a crucial and exciting time in Boston comedy history. The Comedy Connection, the city's biggest club, has moved to the Wilbur Theatre. The Comedy Studio, the place where young comics grow, has never been more popular. Mottley's Comedy Club opened this summer, finally giving Boston a room where deserving lesser-known acts can headline and stretch.

This blog will be dedicated to capturing the Boston comedy scene as it changes, as clubs and comics come and go, wither and blossom. This is one of the funniest cities in the country. If you don't believe me, ask fans of Steven Wright, Mike Birbiglia, Barry Crimmins, Paula Poundstone, Bobcat Goldthwait, Denis Leary, Eugene Mirman, Dane Cook, Jimmy Tingle, Brian Kiley, Conan O'Brien, Jay Leno -- well, you get the idea. Funny people grow here, others come here to get funnier. If I can show you a bit of that, I'm betting you'll come back for more.

So welcome. Welcome to Boston Comedy.
Posted by Unknown at 11:33 PM 1 comments