From the Archives: Bill Morrissey and Barry Crimmins 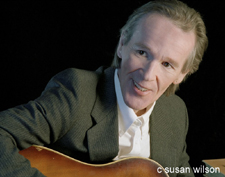 Barry Crimmins and Bill Morrissey played two shows together in 2006 at Jimmy Tingle's Off Broadway Theater in Davis Square - Morrissey and Crimmins: Two Lives Only! I was still writing the weekly Comedy Notes column for the Boston Globe at that time, and one thing I always enjoyed doing was stretching the subject matter outside the bounds of what people would normally expect to see under the word "Comedy." This show was a perfect example.

Crimmins and Morrissey were both masters of their respective arts, comedy and folk music. And Morrissey had a great sense of humor that was perhaps more obvious onstage than on the studio albums. I got to explore Morrissey's work and have a great conversation with him.

Since then, I had always hoped I'd have the chance to speak with Morrissey again. So it was with great sadness that I learned of his death on July 23. He passed away in a Georgia hotel room while touring. But I'm grateful for the one conversation, and that I got to see him on a wonderful night with Crimmins. The following is a greatly expanded version of the Comedy Notes column I wrote for the Boston Globe, originally published May 5, 2006.

It should be noted that this piece doesn't come close to the emotional resonance of Crimmins' remembrance from his blog, Farewell, Hercules... Bill Morrissey 1951-2011. A highly recommended read.

Barry Crimmins and Bill Morrissey bring a bit of Boston history with them tonight and tomorrow when they hit the stage at Jimmy Tingle's Off Broadway. Between the two of them, they've seen or inspired some of Boston's best and brightest in comedy and music.

But since Crimmins now lives just outside of Bath, New York and Morrissey in New Hampshire, they haven't played Boston together since the early nineties. "We're both Boston guys, so meeting up in Boston is the greatest," says Crimmins. We both made our stones in that town."

When they first met at a hip basement club off Harvard Square called the Idler almost twenty-five years ago, they had just started to establish themselves in their respective fields. Crimmins was the creative force behind the Ding Ho, the epicenter of Boston comedy that produced luminaries like Steven Wright and Lenny Clarke. Morrissey was on his way towards recording the music that would lead Ted Drozdowski of the Boston Phoenix to call him the "musical poet laureate of New England."

Crimmins was drawn to Morrissey's writing and sense of humor, and was surprised to find Morrissey had seen him perform at the Ding Ho. Once they started talking, they found they both had an appreciation for the folk work ethic and progressive politics. "I think we're sort of, even though Bill's certainly not overtly political, his work is kind to the little guy and stands up to the big guy, and I'd like to think that's what my work's about," says Crimmins. "I always talked about doing comedy with a big target, and I've never enjoyed people who just, you know, make fun of [the little guy]. Bill's the kind of guy that if he sees a homeless guy, something will soak in and three days later there'll be a genius song about the guy. He finds a context for the humanity of people that might otherwise be overlooked. He sticks up for regular people. His work really notices that their lives matter. That's pretty great."

Crimmins and Morrissey are also considered great writers in their respective fields, although Crimmins would give Morrissey the advantage there. Where Crimmins sticks to nonfiction and current culture, Morrissey can get to truth by creating stories and characters with a master's eye for detail. "One of his songs is like a great novel," says Crimmins. "In one song he gets so much texture, so much character, he has such an eye. And then the other thing, of course he's a folk musician, but if you listen to what he's been doing over the past several years, he always grows musically. He's always adding stuff. And it's because he's not just home listening to Pete Seeger albums. He has wonderful other influences. He knows the blues backwards and forwards, he knows jazz, he knows everything."

Morrissey would agree that he and Crimmins share a sense of politics, but Morrissey thinks Crimmins' humor can cross political lines. "Although Barry is to the left, as I am, his humor will make conservatives laugh," he says. "You know, he's certainly not afraid to poke fun at the left. And I've sat there with very conservative people in his audience and they didn't wanna like him. But despite what they wanted, they did and they were laughing. Which I think is the sign of a great comic, a man whose got a great perspective. Barry just doesn't go out and preach to the converted, which would be a very easy gig. You know, folk singers do that, too. Political folks singers. Just go out and sing to their audience."

Stylistically speaking, it's easy for a musician to preach to the converted, as well, chasing whatever sound is topping the charts. Morrissey has never approached music that way. He has stories to tell and a particular sound, all of which exist outside the bubble of popular music. "There's a lot of pandering," he says. "In music, it seems like people listen to the radio and try to imitate that just to get airplay. I just never did that. The reason I write, I just write with complete disregard to what's popular or what's not popular, what's passé or what hasn't happened yet."

If his sound changes, it's because he's made a discovery that could fall anywhere on the musical spectrum, beyond era or genre. Morrissey likes to explore. "I don't listen to just folk music," he says. "I listen to a lot of jazz, a lot of classic jazz. I listen to old country, because there really isn't any new country. I listen to country and western, and nowadays the closest you can get to that is country and suburban. I listen to classical. I just have an appreciation for good songwriting, or just good musicianship. I'm more than happy to just listen to Lester Young playing with Count Bassie."

It's not surprising, then, to hear Morrissey describe Crimmins' comedy in terms of music. He loves Crimmins' politics and his energy. He even jokingly frets about having to follow Crimmins at this weekend's shows. "He's just a roman candle onstage," says Morrissey. "He's his own Chicago blues band. He was just this unstoppable force."

"What he does and what I think a good musician does, a good songwriter grabs you by the lapels and says, 'Look, I've got to tell you something right now,'" he adds. :And he doesn't have to yell at you but he's got that urgency. As opposed to, 'Oh listen, I was just thinking, I want to talk to you about something.' It's like, 'No man, I've got to tell you this right now.' That's how Barry I think approaches his performing."

Crimmins is equally complimentary. "Actually, I don't think it's fair," he says. "His sense of humor is as good as mine and I can't carry a tune in a wheelbarrow. So it's really unfair. At least he doesn't rub in the fact that he's multi-talented and I'm semi-talented."

"I had one of his CDs in the car the other day," says Crimmins, "and I was listening about the immigration stuff, and I happen to hear his song 'The Man From Out of Town' - 'The laws are not made for the man from out of town.' And I thought, gee, you could translate that song into Spanish and it would really speak to that situation."

Though humor is an important part of Morrissey's show, offsetting his more somber songwriting, he says he could never do what Crimmins does. "I do incorporate a lot of comedy in what I do, but I would never get onstage without a guitar," he says. "I guess that's my security blanket. And I just enjoy the history of comedy, going back to Lenny Bruce and Lord Buckley and of course Jack Benny and people like that. Obscure people like Joe Ancis."

The mutual admiration society has continued throughout the years as the two have gigged together whenever possible and catch up when they are playing the same cities. "When he and I get together, the stories start coming out," says Crimmins. "They get better as you forget the details, because we're both writers and creative, and you know... you fill in the blank spots, it really moves it along."

Both have grown since their early Boston days. Morrissey is now a Grammy-nominated songwriter with ten albums and a novel to his credit. His eleventh is expected to be released on Rounder in September. Crimmins is one of the country's premiere political satirists, writing daily for "The Rhandi Rhodes Show" on Air America and working on an essay-driven book for the radio network.

"Bill and I are the same way in that we both have set the proverbial bar high enough for ourselves that we force ourselves to push and hustle every day," says Crimmins. "Not out of ambition but out of need to protect and continue our art."
Posted by Unknown at 12:20 PM 1 comments