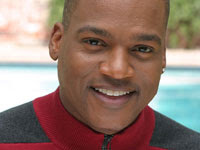 Those who first encountered Ralph Harris on Last Comic Standing in 2007 may not realize he'd been performing for more than fifteen years at that point (you can see his first TV credit was "In Living Color" in 1992). He'd already had an HBO special and a Comedy Central special by the time he hit LCS, and a spot on the sitcom On Our Own.

Tonight and tomorrow at Giggles Comedy Club (Route 1 in Saugus), you'll be seeing a seasoned comic with a couple of decades of material from which to draw. Here's a bit from his 1996 HBO comedy special to get you ready.