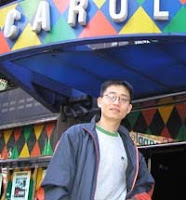 Tonight at the Tavern at the End of the World, Joe Wong will be working out an unusual set. It’s not for a big local show, or even a late night talk show spot. Wong will be doing the set he’ll be performing at the Radio and Television Correspondents Dinner in Washington for an audience that will include President Barack Obama and Vice President Joe Biden.

Tonight's show is a special event, the Twas the Night Before St. Paddy's Day showcase (Tony Moschetto will also be on hand). Scotty Lombardo's regular open mic will resume next Wednesday.

I spoke with Joe earlier today about playing for the president, and the material he has planned.

Are you nervous for tomorrow night?

Not really. I’ve practiced the set many times before. Who knows, maybe I will change my mind once I get there.

Have you been coached by anybody about what to expect?

My manager’s been to similar occasions a couple of times before. He kind of knows what to wear and so forth. Honestly, the biggest hassle is getting a tuxedo ready. That’s like a brave new world to me.

Do you have any special material planned because the dinner is of a political nature?

Oh, yeah. I have a lot of political jokes. The entire set is, some immigration stuff, and the rest is mainly politics.

Was that something that was unusual for you?

It’s very different than my usual routine, in a sense. But on the other hand, in 2003, I had a short film about me running for president. I sort of used that concept but added more political jokes. I really enjoyed this process, though, I have to say, coming out with jokes, making fun of current policies or saying something totally absurd about my political views. I’m having fun with it. And it’s the Radio and Correspondents Dinner, so I don’t even have to worry about my choice of words. In a regular comedy club, I have to make that sure I don’t use big words that turns people off, but in this case, they’re all reporters.

Do you have any specific targets or is it more you’re poking fun at yourself?

Mainly I’m poking fun at myself. But also, I have some jokes about Scott Brown. Of course, Obama and Biden. And a little bit about the Supreme Court Justices. That’s about it. Samuel Alito is going to be there, I think.

I just hope that the reporters should know, pretty much should be up to date with current events. Some jokes won’t work in the general audience, but they should be more accepting of it.
Posted by Unknown at 3:46 PM

Email ThisBlogThis!Share to TwitterShare to FacebookShare to Pinterest
Labels: Joe Wong, tavern at the end of the world