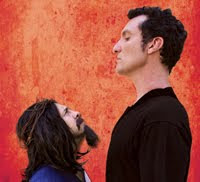 Sean Altman earned his self-applied stage name Jewmongous by being Jewish and incredibly tall. In fact, he claims to be taller than Jesus, or at least implied that by naming his 2007 Jewmongous album Taller Than Jesus. Altman co-founded the a cappella group Rockapella, but since he left that group, he has been applying his musical talents to ethnic humor with his two-person show, What I Like About Jew and the one-man Jewmongous.

As Jewmongous, he sings about Jews for Jesus, drinking Christian baby blood, and a number of Jewish holidays (see the video for “They Tried to Kill Us (We Survived, Let’s Eat)” below). Altman comes home (he lived in Boston with his father for a while and still has family here) tomorrow to play Club Passim in Harvard Square.

Has the Jewmongous repertoire changed since you were here last? Any new songs?

Two of my best songs are brand new: a rollicking Italian tarantella called "Blame-a De Jews" (sung by me as an ancient Italian Pope!) which attempts to explain the ancient papal roots of institutionalized anti-semitism.

What will the goyim get out of Jewmongous? Will they need to read up before the show?

Goyim (non-Jews) are more than just welcome; they're encouraged! The show is much more fun with lots of goyim in attendance, as I get to explain the bizarre-o quirks of my people to the uninitiated. I'm just learning myself, so it's truly the blind leading the blind (toward a vat of exceedingly heavy food).

One of the quotes on your site mentions Kinky Freidman – was, or is, he an influence?

No. I could name one Kinky Freidman song, although his first name makes me feel all tingly down in my special place.

No. I can name a couple of songs, but I own no albums and have no mp3s. Zappa is too fancy for me. Musically, I'm a meat'n'potatoes Beatles guy, with some Ramones and O'Jays thrown in for spice. Lyrically, my biggest influence is my Dad (a UMass Lowell Physics professor, no less!), who told me lots of Jew jokes growing up.

When last we spoke, you mentioned that you were getting a new audience at most every show, unfamiliar with the songs. Has that changed? Does the show has its own following now?

My picture is in today's (Wednesday) Boston Globe, so I hope I get lots of newbies attending the show. My show tends to draw a strong repeat clientele, kind of like a fine restaurant or a skilled hairdresser or a talented hooker.

Are you someone who enjoys April Fool’s Day? Do you play pranks?

My prank will be to appear onstage at Club Passim, masquerading as a someone who knows anything about Judaism.
Posted by Unknown at 3:54 PM