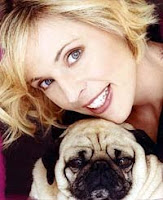 Maria Bamford is popping up all over the place these days. Earlier this month, she released a new DVD, Plan B, of her one-woman show about moving home to Duluth during a career slump. She’s on the Disney Channel’s Kick Buttowski. You may also have recognized the Comedians of Comedy star on Target TV ads around Christmas (she says she got to improvise those, which is probably why they were funny).

If you haven’t already seen her free one-hour special (available for download on www.mariabamford.com) or heard last year’s CD, Unwanted Thoughts Syndrome, you have a lot of catching up to do.

Which is why the theme of Plan B – Bamford moving back to her hometown of Duluth Minnesota to reassess her career options – seems ironic. It’s hard to think of a comedian with a fuller schedule than Bamford’s these days.

Bamford is known for her keen ability to create complete characters, every one with their own distinct voice and set of mannerisms. She stretched that ability in Plan B, voicing an entire town, addressing each other and addressing Bamford, sometimes several to a scene. Still, Bamford didn’t find it difficult to intertwine the different characters. “It was fun to imagine what it would be like to move home,” she says.

Most of the characters from Plan B seem to have no idea what Bamford does for a living or how it works. Longtime fans will recognize Bamford’s mother, and a register jockey who tells Bamford that she was never funny, just weird. The interactions are hilarious, but Bamford says the real life perception of her job is a bit less crazy. “Nobody seems to weirded out by it,” she says. “I think I make up stuff so that I seem like more of a weirdo.”

If you usually ignore the commentary tracks on DVDs, don’t ignore the one on Plan B. It features Bamford with her parents watching the show, pointing out their favorite jokes and telling stories. “I think they really enjoyed it and they are game for anything, as they are my parents,” she says. “My dad opened for me at a motorcycle rally in my hometown and did his first 15 minutes of standup in front of a crowd of moderately interested Midwest biker-types. He is a good egg. And I did pay him 300 bucks.”

Bamford will be headlining a sold-out show Saturday at ImprovBoston as part of the Women In Comedy Festival doing stand-up with Jackie Kashian and Maria Ciampa (you can still get tickets to the simulcast here). She’s also hosting an open mic Saturday afternoon at 1 PM, with an unusual process.

Those who want to perform at the open mic will show up and put their names into a hat. Only the comics who are chosen will stay for the open mic, which is closed to the general public. “I love a short open mic with no audience, which is why it’s limited to 8 lucky signuppers,” she says.

Women in Comedy co-founder Maria Ciampa is thrilled to have comics like Bamford and Kashian, as well as Edie McClurg (part of the All Girl Revue playing tonight and tomorrow) as part of the mix with a strong line-up of local stand-up, sketch, improv troupes, and storytellers. “Bamford and Kashian are both unique, funny voices, so it means so much to lots of Boston comedians to have them in town,” she says.

Also search for "The Maria Bamford Show" on YouTube, which features some of the same material as Plan B, but in a video sketch format: