Jimmy Tingle Back At the Regent Tonight 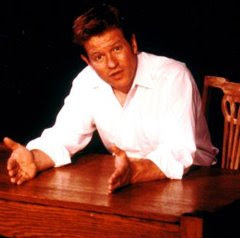 Anywhere comedy can possibly be performed in Boston, Jimmy Tingle has played there. When I spoke with him Friday, he was on his way back from a St. Patrick’s Day breakfast gig in Lowell (who has the energy to be funny at breakfast?). Since Tingle’s Off-Broadway Theatre in Davis Square closed in 2007, he has been taking advantage of his ability to travel a bit more, locally and beyond.

“Now that I’m not doing that anymore, I can play around town and I really love it,” he says. “It frees me up to do things around the country and it’s just great to get in front of new audiences in new towns.”

Tingle heads to the Regent Theater tonight to play a show with no specific theme or title, which is also unusual for Tingle these days. “I’ve been so married to the one-person show thematic format of it – I’ve done American Dream and Tingle for President – I’m calling it just Jimmy Tingle in Concert,” he says. “It’s just a fun show. It’s highlights of other shows and new stuff. They were calling it the Laughter Stimulus Plan, but it’s not a brand new show based on economic theory. We’re having a ball. It’s just fun to be loose.”

Tingle is doing a monthly show at the Regent, booked through June. It’s a comfortable environment for Tingle. He produced several shows there when the venue opened in 2001, and is now co-producing this show with the Regent. He enjoys working with the Regent staff, and gets to play a bigger room on a regular basis, all without the grind of owning his own space. Plus the Arlington location is close enough to attract some of the old Off-Broadway crowd. “I do a high profile gig once a month in town, it’s a public event,” he says. “It’s really good. It’s a reasonable price. I like the arrangement very much.”

Tingle is also readying his new CD, Jimmy Tingle for President. It’s available now as a download, and will be available on CD April 14.

Tingle on casinos in Massachusetts: