Ardal O'Hanlon Back in Boston Tonight 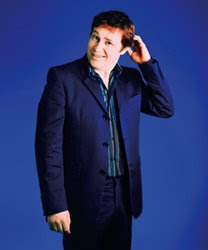 Irish comedian Ardal O’Hanlon sold out four shows when he played the Burren in 2007, and with good reason. He’s a popular comic in the U.K., partly due to the fact that he played Father Dougal McGuire in the classic British sitcom Father Ted, and partly because he’s simply a great comic. He is adept with a good story or a quick punchline, a fine skilled comedian.

Since 2007, O’Hanlon has been busy back in the U.K., doing guest spots on shows like Skins, and looking into his own history (a grandfather who was in the IRA with Michael Collins, and a line that stretches to Peter Fenlon Collier, of Collier’s Encyclopedia fame) on RTE’s Who Do You Think You Are? Tonight at the Somerville Theatre, you get a second chance to see O’Hanlon live. I spoke with him by e-mail this week (and kept the English spellings in, so you know it’s authentic).

What was your impression of playing the Burren when you were here in 2007?

Have you been over to the US much since then?

Only once while researching a documentary about my family. I spent a few days in New York looking up an obscure relative who founded the mighty Collier publishing empire. As you can imagine I was especially interested in what happened the fortune.

Did you find a lot of fans wanted to know about "Father Ted" when you were here?

I was surprised and gratified to learn that there were a lot of genuine Fr Ted fans in the US many of whom travelled long distances for the show. There were also a lot of first generation Irish there for whom Fr Ted is something of an institution.

I've read that you searched your family tree for a show on RTE – were you surprised at what you found, especially about your grandfather and the IRA?

I was dimly aware of much of my family history but was blown away when we uncovered the actual evidence. My grandfather was a modest unassuming man who for love of his country threw himself in at the deep end of the War of Independence. He had always been a somewhat distant hero to me but thanks to the programme I felt I got to know him as a man and walk a little bit of the way in his shoes.

What is your role on Skins? (The show airs on BBC America here).

Skins is a cult show in the UK. A lot of the adult roles are played by reasonably well-known comedians and actors. I play a down-at-heel teacher who gets a little too close to one of his pupils.

I notice you have a section dedicated to Bill Hicks, Eddie Izzard, Dylan Moran, and Tommy Tiernan on your site listed as "coming soon." What are your plans for that?

That I am embarrassed to admit is a very old website (2001) which was
never finished. I believe the list you refer to was a list of my favourite comics at the time. Coincidentally Tommy Tiernan, Dylan Moran and I have advanced plans to do a mini-tour of the US together hopefully this June.

How are you balancing stand-up and other work at the moment?

I did a movie before Christmas called Wide Open Spaces which stars Ewen
Bremner and should be released in the autumn. After Boston and New York I am on the road a lot taking in far flung places such as the Middle East and China (it sounds a lot better than it is - they are low-key shows for English language communities). Then it is back home to do a new sitcom about an Irish politician.

A bit of video from O'Hanlon's last stop in Boston, from Off the Boat Comedy: