Tonight is the second edition of FunnyGrownHere.com Presents… Discount Variety at the Cinema Salem Café (One East India Square, 8:30PM). If you’re thinking of heading out to the show, or you’re on the fence about coming out, here’s a bit of info about tonight’s performers, singer/songwriter Danielle Miraglia and video ventriloquist Even O’Television. We’ll also have videos from Hard Left Productions, and I will be hosting. So if you have a car or access to the commuter rail, come out to Salem tonight for some music, comedy, and video shorts. 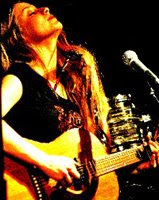 Bio: Raised just outside of Boston in Revere, MA, where its famous beach is better known for girls with big hair than its history as a popular tourist attraction, Miraglia was raised on a variety of popular music, from her parent's Motown records to the classic rock influences like The Rolling Stones and Led Zeppelin that encouraged her to learn to play guitar at thirteen. A passion for the arts and an outstanding gift for writing lead her to Emerson College in Boston's downtown theater district. After graduating with a degree in Creative Writing, she put her writing skills, originally intended for novels, towards songwriting and began performing at open mike nights in the Boston area. This set in motion what would become a full-time career in music.

It’s been 10 years since the first time I ever played original songs on a stage at the now defunct Kendall Café in Cambridge.

Anyplace where people are there specifically for the music.

Favorites of all time, George Carlin, Steve Martin, Steven Wright and I’m obsessed with Bill Hicks. I have a very annoying habit of pointing out every little thing that anyone has ever ripped off from him. I still feel like he’s never really gotten enough credit for how much influence he's had on comedy. I also love Dave Chappelle, Bill Maher and Louis C.K.

What is the best comedy show you’ve seen?

I’ve seen some greats live. I’m thankful to have seen George Carlin before he died and I’ve seen Margaret Cho, and Steven Wright, but they were in such large venues, it’s not the same vibe as seeing a comedian in a small club. It was more like “Wow, I can’t believe that’s one of my favorite comedians in person!” than “Wow, what a great show!” I think the most energetic and greatest live comedy shows I’ve seen have been any that involved Kevin Knox. He just has the gift of great intense delivery. He can say anything and it’s funny. It's been a while and I don't remember the material itself at this point, but I just remember the whole room rumbling. 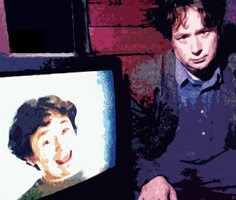 Bio: Evan O' Television has been dazzling and perplexing audiences with his one-man-double-act and video ventriloquism since 1995. For a decade Evan also served as a co-founder and resident Artistic Co-Director of the underground performing arts space, PAN 9. In 2007 he was profiled in An Encyclopedia of Vaudeville Performers by Routledge Press. "Double Negatives," Evan's full-length solo theatrical work premiered at the Perishable Theatre in March 2008 and will be appearing in new venues throughout 2009.

I have been performing in Boston since 1994. I first learned about Television in 1995.

The Coolidge Corner is delightful. The Cambridge YMCA is invigorating. The Comedy Studio has an adventurous audience. The Perishable Theatre is my home away from home. But the living room at my old loft (PAN 9) always contained the folks that returned my love the most reciprocally.

I am lucky enough that much of my favorite music is made by people I know. In Boston, Fluttr Effect, HUMANWINE, The Dresden Dolls, Goli, Beat Circus, and Hallelujah The Hills are the folks I try not to miss. I also love the Steamy Bohemians!

And Danielle, I got to share the stage with Danielle once before at club Passim (for one of Peter Dutton's shows) and she was singing some real 'shake you to your bones' music. She's got that powerful kind of voice that will spirit you down from the mountains to hear it.

Nationally, my tastes run pretty eclectic. I am just as likely to listen to underground hip-hop like Oddissee, Quasimodo or Hell Razah as I am the latest from Wilco, Dylan or Gillian Welch. I am sad Sleater-Kinney doesn't tour any more and Sun Kil Moon is a recent favorite.

Once at Pan 9, Jonah Rapino of Devil Music brought in this Japanese band called Ghost that was led by woman named Chiaki Yoshihara. (I later learned there was another Japanese band named Ghost, as well).

Anyway, the taxi driving the band had gotten in a car accident, and so by a fluke of timing they ended up headlining our show by default-- even though we had never seen them play before. From the moment they started playing, the room thundered with this epic orchestral-punk music. Chiaki Yoshihara was like this wild fusion of Lou Reed and PJ Harvey. That show was the closest I have ever gotten to outer space.

Last year the most stunning and amazing show I saw was a woman named Merill Garbus who plays under the name tUnE-YaRdS. The year before that, it was Sxip Shirrey (who sometimes plays with Brian Viglione of the Dresden Dolls). He completely blew me away.

I think Brian Carpenter of Beat Circus puts together some of the best shows in Boston, when you go to them you really don't want to miss a single act.
Posted by Unknown at 12:35 PM