The Dress Up Show at Mottley's Tonight 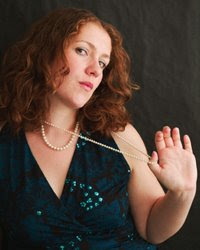 If you head out to Mottley's for a little pre-weekend comedy tonight, you may notice things look a little different. It may appear that you have walked into the Great Gatsby, and some of your favorite comics may not appear as you are used to seeing them. Same goes for the audience. That's because you have stumbled into The Dress Up Show, hosted by Ering Judge and Bethany Van Delft. The show is a chance for comics (and the audience, if they so choose) to put on their best finery, which may necessitate a quick trip to a secondhand shop for some. The series begins its run tonight, and will run the second Thursday of each month.

Here's a bit about the show from Judge.

What inspired the Dress Up Show?

Well, Bethany and I co-hosted a show once, and we had such a great time that we knew we wanted to co-host on a regular basis. Over the summer, I went to see the "Sex and the City" movie in the theater, and I was amazed by how dressed up the audience was. It was evident that tons of people are dying for some place to wear their most fabulous clothes, but not a lot of bars and restaurants around here inspire that vibe. Bethany thought dressing up would be a fun theme, and she pointed out that if we did a show on the early side in the city, we could attract people who want to hang out in town after work during the week. That's why we're doing the show at 7pm on Thursdays, and Mottley's Comedy Club provides the perfect downtown location.

Do you think the audiences will take you up on this?

I do! We've already gotten a lot of positive feedback about the dressing up aspect. And it's pretty free-form, so whether people want to wear glittery platform shoes or a top hat or a ball gown, it's all welcome. But if you wear a top hat, you have to sit in the back.

How many of these do you plan to do? Are you thinking of this as an indefinite run?

It's a monthly show that will take place on the second Thursday of every month, and if it goes well we hope it will become an ongoing thing. The owners of Mottley's (Tim, Jon and Jeff) have been super open to the concept, so hopefully it'll catch on and go for a while. Our second show will be April 9th.


What have you heard from the comedians who are participating so far about their level of enthusiasm?

Everybody seems pretty excited about it. It's a great excuse for the comics to experiment with self-expression and that crucial first impression on stage. The rule is that comics have to be more dressed up than they normally are on stage, so it's definitely a relative level of dressiness. I think it'll be interesting to see who chooses to dress formally or business-like and who goes with something funkier.

Do you expect this to change the vibe of the comedy at all?

I think it really might! Of course, it depends on the comedian. For some it'll be a total artistic twist that might even disrupt their normal on-stage persona, but I think for the most part it'll be interesting to see who seems much more confident wearing something fancier than usual.