Craig Ferguson and the Road to a Bit O' Revolution 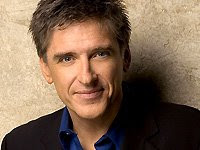 Since Craig Ferguson's first one-hour stand-up special, A Wee Bit O' Revolution, was taped at the Comedy Connection Wilbur Theatre, and airs tonight on Comedy Central, I thought it might be a good time to take a look at my interview with him for the Boston Globe a couple of years ago. I found him to be a fairly down to earth, less frenetic version of who you see every night on The Late Late Show. He took a long road getting into stand-up, then out of it, and then back in again.

The Glasgow-born Ferguson dropped out of high school at 16 and wound up working in factories, doing construction, and tending bar. He came to comedy after drumming in punk bands, then found sudden success in the U.K. with a character he was doing at open mics called "Bing Hitler." "Within a year of doing the open mic night, I was playing two and a half thousand, three thousand-seaters with that open mic character," he said. "It was crazy."


Ferguson moved to Los Angeles in 1995, and not long after wound up with his gig on the Drew Carey Show not long after. It was a breakthrough for him, but he stopped doing stand-up to concentrate on the show. "When I came to America and got the gig on the Drew Carey show I just stopped doing it," he said. "And I hadn’t done it for ten years. And I think once you’re a stand-up you really always are a stand-up, and I always had this nagging feeling that, I’m in trouble, because if I have to go in and do my act, I don’t have an act."

The Drew Carey Show ened in 2003, and Ferguson got his Late Late night gig in 2004, which threw him back into the world of stand-up comedy again, working on a nightly monologue. Ferguson is greateful for the leeway he was given by David Letterman, Les Moonves, and his CBS bosses to make it work. "They just said you’ve got to find your own style, you‘ve got to do your own thing," he said. "We eventually got to the way we do it now, which is basically a very haphazard kind of, it’s kind of a mess. But it works for us, and the numbers speak for themselves. And the show’s success I think is to do with that. We don’t try to be something we’re not."

That eventually led him to the free-form monologue he does on the show now, which in turn led him back to comedy clubs (and to Revolution). "There’s nothing more liberating than doing stand-up," he said. "It is the number one instant access shot in the arm for performers. It’s the only way to do it if you can do it."

Ferguson also became an American citizen last year, something he has talked about on the Late Late Show frequently. In 2006, though, he was still studying for the test. His thoughts on the subject will seem familiar to you once you've seen the special. "I consider myself an American in a way which perhaps alarms regular Americans,' he told me then. "You know when someone becomes a Catholic, people who have been Catholics all their lives are like, why are you so extreme about this? You feel like you have to be extra-Catholic just to catch up on them or something. I’m kind of like that with America. There’s nothing more zealous than a convert, and that’s kind of me with America."

Further reading:
1. Sean McCarthy's take on the special over at The Comic's Comic.
2. Also take a look at Ferguson's comic novel, Between the Bridge and the River. It's a fun bit of strangeness, worth seeking out.
Posted by Unknown at 2:48 AM