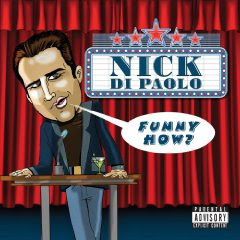 Danvers native Nick DiPaolo started out as a stand-up comic in the Boston scene in the late 80s, cutting his teeth at Nick’s Comedy Stop and Dick Doherty’s clubs. He had a marketing degree, but never really took that seriously as a career (he once told me in an interview for the Boston Globe, “If I learned anything, somebody would have known me by now. I really lack in the marketing skills.”).

After a couple of years of one-nighters around New England, DiPaolo moved to New York, where he perfected his angry, sarcastic persona, peppering his act with more right-leaning political commentary. That’s the DiPaolo most people know – gruff, conservative, and unblinking in his criticism of what he sees as an overwhelming political correctness that envelops race and gender relations. He’s been a regular on both Howard Stern and Opie and Anthony, and got a taste of what it’s like to host his own show on New York’s Free FM, which lasted only five months.

DiPaolo still makes it back to Boston regularly (he was part of the NECN Comedy All Stars taping at the Wilbur a few weeks ago, and often comes to town with Artie Lange). And his regular opener, Joe List, is also a transplanted Boston comic now living in New York. DiPaolo is part of a bill of Boston comics, past and present, for Friday’s Comics for a Cure show at the Cutler Majestic Theatre, along with List, Gary Gulman, Kevin Knox, and Kelly MacFarland. His new CD is called Funny How?

How did you get involved with this show?

My opening act Joe List was asked by Tracy Harding if I would perform at this benefit and i said sure because I believe every once in a while you should give back. It benefits children with cancer. I mean how could anybody say no to something like that?

How has the new CD been doing?

The new CD Funny How? is doing quite well. I keep shipping boxes of them to Amazon and they call back a few days later asking for more. I figure at this rate it will go "copper" by March.

I recorded it at ACME Comedy Co. in Minneapolis. It's my favorite city besides Boston to perform. I sell out there every time and the people love my shitty east coast attitude. I chose there because the audiences are so polite. They actually sit and listen even when they're drunk. It's the coolest thing.

Is getting a radio show your ultimate goal? It seems to have suited you in the past but it's hard to carve out your niche in a crowded field.

There aren't that many slots to go around in NYC when it comes to talk radio. It's what I want to do still. I enjoyed it so much when I was on 92.3 Free FM. You can be funny without interruption, no hecklers or chatty assholes fucking things up. I loved it!

Do you think you'll be appearing on Fox News again this year?

Well, I did the show Red Eye and Fox and Friends and hope to do them again. I'm still doing their streaming show called "The Strategy Room." I had a little run in with Shepard Smith on that show and it got 160,000 hits the next 2 days.

Considering your more conservative political views, do you expect the next four years to provide you the kind of boon for material that the last eight years has for more left-leaning comedians?

Please! Making fun of a Black man? Is that even allowed? You see there's the difference. The business I'm in is run by people who are quite liberal as far as politics goes. They don't like it when you attack what they hold near and dear to there pol. hearts and they won't think twice about holding that shit against you when it's time to give you a job. But that hasn't stopped me yet.

Do you still have any connections to Danvers? Is your family still there?

Yes, my coke dealer still has a home there. My parents and one of my sisters is still there.