Chris Zito Hangs It Up 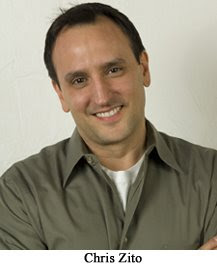 Last year, when Chris Zito had a feeling his radio gig at 104.5 XLO might be coming to an end, he jumped back into one of his first loves, stand-up comedy. He hadn’t performed for five years, but never officially said the “r” word – retirement. But tonight at Dick’s Beantown Comedy Vault, Zito will call it a career and quitting stand-up comedy.

Zito was on the line-up for the Vault’s first night, according to Dick Doherty, on September 27th with Doherty and Paul D’Angelo. And that has been his regular hang out since he came back in September of last year. Zito says he’s enjoyed his time back, but now that he’s on the Zito and Karen Blake show mornings on Oldies 103.3, he won’t have time to pursue it anymore.

“I didn't really miss it while I wasn't doing it, but after a few weeks back when I started to get my chops back I had a really good set,” he says. “There's nothing like that. Nothing. I had forgotten what it was like to be up there feeling in complete control of a room.

“Who knows what the future holds? But for the foreseeable future all my creative energy will be in the Zito and Karen Blake show on Oldies 103.3. We're having a ball. It's very competitive and I just can't afford to go at it with anything but my best and complete effort. I owe that to my partner. And CBS.”

Michael Sullivan, a producer on the morning show at Oldies 103.3 is glad to have Zito’s full attention. He met Zito years ago, when they were both working on another morning show at Boston’s WZOU (which eventually became WJMN Jammin’ 94.5). He also worked with Zito in Detroit, where Zito worked another radio gig from 1996 to 2001. “In the nearly 20 years I have known Zito, he has been one of the funniest stand-ups I have ever seen,” says Sullivan. “And he's a better Morning Show host. And we're lucky to have him on the Zito and Karen Blake Morning show.”

Tonight is his official retirement, and he’s got to be on the air every morning at 6AM, which means you probably won’t see Zito in the audience much, either. “I'm a morning radio guy,” he says. “We're notorious for never going anywhere. This job just has a way of making you want to be in your jammies by dinner time, even on Saturday night. But yes, occasionally I'll pop up somewhere.”
Posted by Unknown at 2:12 PM