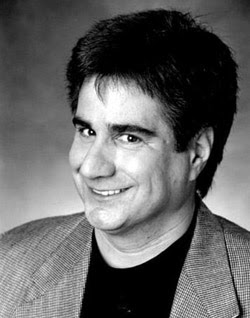 Boston comedian Bob Lazarus died in his home in Stoughton last night. He had been battling leukemia since the summer of 2007. He is survived by his wife Kathi and his daughter Carly.

I only really knew Lazarus, or “Laz,” as his friends called him, for a couple of years. The first time I met him was a few years ago at Jimmy Tingle’s Off Broadway theater. I would see him in the audience there, and occasionally onstage. But I only really came to know him better after his leukemia diagnosis, when I interviewed him for the Boston Globe before the first benefit held for him at Giggles in 2007.

There are dozens of people in this scene who know Lazarus better than I do, and I can say that no one who knew his name here ever had anything but kind words to say about him. His passing is a sad event for the whole Boston comedy community, a community Lazarus had been a part of since 1978. Benefits for his treatments drew Lazarus’s fellow veterans from the Ding Ho days like Steven Wright, Tony V., Barry Crimmins, Jimmy Tingle, Steve Sweeney, Lenny Clarke, Mike McDonald, and Mike Donovan. And when Laz had his great set at the Wright’s Boston Comedy Hall of Fame induction show December 15, the comics were laughing loudest.

From my e-mails and brief conversations with Lazarus, I can tell you that he faced some very dark times with his sense of humor intact. In early December, his condition took a turn for the worst. But with the prospect of getting onstage with old friends a few days away, it didn’t take him long to bounce back. Within a week of that bad news, Lazarus e-mailed me to say he would be allowed to get onstage at the Wright show, saying, “The odds of me getting leukemia in the first place were pretty slim, so who's to say I can't win?”

Later that day, he wrote back that he wasn’t going to reveal how bad things had gotten in his act, but he was still going to have a bit of fun at the expense of his leukemia. “That's a little tough to poke fun at, but I am going to wear a shirt asking for donations with my address on the back,” he said. And anticipating that I might take him seriously and print that, he said, “I am joking.”

HE WAS MY UNCLE