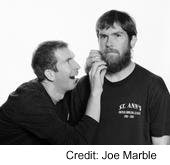 When Chris and David Walsh left Boston for Los Angeles in March of 2007, they left a scene changed for the better by their participation. They created the Great and Secret show at ImprovBoston, which encouraged the participation of a generation of comedians who are redefining the current scene – Dan Sally, Renata Tutko, Nate Johnson, Chris Coxen, Ken Reid, Sean Sullivan and countless others. Their D.I.Y. spirit was inspiring, and the Great and Secret is still at ImprovBoston every Thursday at 10 PM, while the boys have brought their own G&S to the Improv in Los Angeles. The Walsh Brothers are back for the holidays, playing Mottley’s Comedy Club tonight and tomorrow and the Greater Boston Alternative Comedy Festival Wednesday. I caught up with David by e-mail to talk about life in L.A. and coming home.

Is it important to you to keep coming back to play Boston?

It is very important that we come back to play Boston. Actually, imperative might be a better word. The opportunity to perform in front of Boston audiences is reason enough to make it important. In our limited experience (playing the road a bit and the big comedy cities: CHI, NY, SF, LA), Boston has the best audiences for standup. Their smart, open to whatever we do, and have a long, comedy history (it's important that people remember seeing Don Gavin in 1983 at Stitches and then tell us we remind them of that time).

In addition to the audiences, the city itself is where we're from and what we're about. Every time we get introduced in Los Angeles, the emcee brings us up as from Boston. Most of our comedy and sensibility (Oh the sensibility!) comes from direct experience - true stories, real people and characters, our surroundings - and our whole life was spent here, so it's crucial that we stay connected and involved. And on top of all that, we developed here as comics. The comedy community is the best. We've got friends, a few enemies (which always helps) and great clubs and theaters to perform at. (This whole thing is a mess).

How do you keep in touch with the scene?

We keep in touch with the scene through Hologram technology. And friends. Friends keep us up-to-date on the comings and goings of everyone. Like an isolated mental ward patient, the comedy studio Kvetch Board is good to check in on once in a while. One thing that's cool about having our own show in Los Angeles is that it's kind of a way station for traveling comics. Every Boston person who comes to L.A. usually comes by our show and we put them on stage. Then, in front of our lawyers, they give us a deposition about what's happening with the Boston comedy scene. Most people say it's just Chris Coxen playing with himself.

What are your plans for the Great and Secret West in the new year?

The plans for the Great & Secret West are to do an industry showcase after the new year. We've been doing the show for almost a year and built up a bunch of new sketches, characters and videos and we're ready to show "the people who matter." So we'll get the agents and the executives and the czar of comedy down to the show, see what the feedback is and go from there. It doesn't really matter what they say. We'll continue to do what we do, if only because we don't know how to do anything else.

Other than that, we'll continue to build the show and the audience. And maybe fool around with the idea of a concept show.

How many folks that perform at the G&S in LA have Boston roots?

Aside from a few of the stand-ups that perform at the Great & Secret, most people involved with the show have Boston roots. We write and do the show with James Patterson - who we started out with in Boston. He's kind of become a third Walsh brother, much to his chagrin (which as chagrins go - is very large). And then we got kid from Emerson and the show Zebro doing a lot of stuff with us. His name is Fred Young. He's a great maniac. That's the nucleus of the show. And then we have mostly Boston people on speed dial that we call up to play characters as we need them.

One thing we're always on the lookout for though is a Murray. We can never find a good Murray. Ben Murray used to be our booth guy in Boston and he was the best. He wasn't just a booth guy. He was a presence, an ethos. We keep hiring guys from the tech union and none of them fit.

Do you see a huge difference between Boston and LA audiences?

This is a hard thing to explain because an audience is an audience is an audience. Comedy is a guy with a mic and people paying to listen. However, the people paying can have different agendas. For the most part, a comedy show in Boston has people who want to laugh and experience some sort of release. In Los Angeles, you have the same thing and then a certain amount of people who are filled with self-interest: industry, wannabes, star-f*ckers, geeks, sluts, bloods, wastoids, dweebies and dickheads. The self-interest creates a different type of atmosphere. Los Angeles is more of a 'scene'. But that's only a part of it. It goes on and on. Also, I have no idea what the eff I'm talking about. Boston=Better.

Is there any particular place in Boston you like to come back to for the holidays?

The Comedy Studio Christmas Show and party is a great night (Dec. 21). Usually hang out with Keith Lockhart and the Pops one evening. Go to Billy Tse's on Commercial St. for my favorite festive Chinese food. Scope the malls on the North Shore for high school chicks. And a little, bunny hill skiing at the Blue Hills.
Posted by Unknown at 3:11 AM