Lea DeLaria: Laughing and Singing at the Calderwood 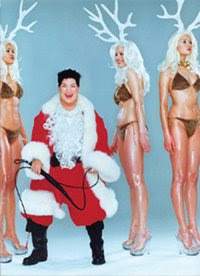 For the past ten years or so, Lea DeLaria has been more of a jazz and Broadway singer than a comedian, but the mark she left on stand-up can’t be forgotten. When she played Fox’s Arsenio Hall Show in 1993, she became the first openly gay comedian to perform on network TV. For the next three nights at the Huntington Theatre’s Calderwood Pavilion, you can get a taste of the breadth of DeLaria’s talent as she brings her Christmas show to the Upstairs at the Calderwood cabaret series (with a couple of Berklee musicians in tow). I spoke with her for the Boston Globe last week, but here’s another peek at what you can expect, from that conversation.

“I think that’s one of the reasons I stand out as a singer because all singers do patter between songs, it just so happens that I have a history as a stand-up comic so when I do my patter, it’s funny,” says DeLaria. “Sometimes it’s hilarious. The tour I just did in Australia, people were screaming with laughter. It was just that type of tour where I was on, I was really funny, the music was great, the band was on. I mean, I’m kind of looking for that to happen when I come to Boston. It’s that kind of show. No one really hires me to just do stand-up anymore. It’s not my life.”

Was Lea the first?
I know that Bob Smith was the first openly gay comic on the Tonight Show, but I'm not sure of the date.