Tingle In the New Year 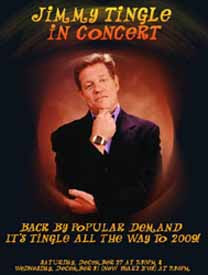 Jimmy Tingle has had a full year’s break from being a theater owner after his Off Broadway closed down, and he spent it playing clubs and theaters, re-sharpening his comic skills. The coming year will be busy for Tingle, who is working on the release of a DVD and CD release of Jimmy Tingle for President (he’s shooting for a mid-January release for both). The shows are drawn from his run at Watertown’s Arsenal Center for the Arts earlier this year.

“It’s basically my platform,” he says. “It’s fun. But it’s stand-up and it’s the platform, there’s audience participation, there’s a question and answer session with the audience.”

If you’re wondering why he’d release a “For President” album after the election, Tingle says the material was never about a single, particular campaign (other than his own). “It’ll make sense in a year, it’ll make sense in two years,” he says. “It’s not about McCain or Obama or Bush, really. It’s about ideas and it’s about ideas for a comedic run for the presidency.”

Tingle is also working on a new show and a new movie (based on his American Dream show). In the meantime, you can see him at the Regent Theatre Saturday and New Year’s Eve.
Posted by Unknown at 12:25 AM