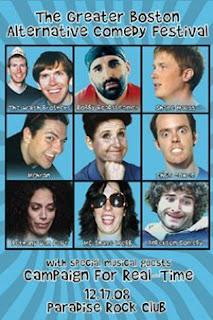 Robby Roadsteamer knew he was asking for trouble by naming his latest production “The Greater Boston Alternative Comedy Festival.” Having worn a path between Boston’s music and comedy scenes over the past several years, he’s aware of the problems the term “alternative” presents. In the music scene, everything not Top 40 or hip hop became “alternative,” crowding the field until the term became useless.

In comedy, the description is often a dividing line between comics who view themselves as more traditional comedians (a definition that’s almost as useless) and comics who see their work as edgier or more original. But there’s little in the mechanics of what happens onstage, in structure or set-up, that could provide a definite line of demarcation.

Andy Kaufman did character work, but so did Sid Caesar. Jackie Martling does set-up and punchline material, but so does Steven Wright. Margaret Cho and Patton Oswalt may tell stories, but so did Andy Griffith (and if you’re suspicious of dragging out Matlock as an example, dig up a copy of his “What It Was Was Football.”). The structure of doesn’t define the genre, and none of those comics stick strictly to those structures.

“It’s like anything abstract,” says Roadsteamer. “It’s like describing art or love or anything. It’s like, you get to a certain degree where you have an idea of what the differences are, but to even try to define very stripped down – ‘alternative comedy is a comedian who goes up and doesn’t…’ – that’s stuff where you’re going to find a lot of contradictions.”

What you can say about the show is that it is packed with eclectic, immensely talented comedians. The Walsh Brothers put an indelible stamp on this scene with their mix of personal storytelling, rooted in their Charlestown upbringing, and absurdist sketch. Shane Mauss can write a standard joke as well as anyone, but will stretch talking about the strange things he’s experienced with his sudden popularity after his success at the U.S. Comedy Arts Festival in Aspen and his Conan appearances.

Chris Coxen has been developing a set of characters, including the plastic-haired “Future Queer” and lounge singer Barry Tattle for the past several years, and they’ve recently started to mingle in more integrated shows. The Anderson Comedy Group has a taste for bizarre and sometimes tasteless sketch and short film. Shane Webb (who will MC the evening), Bethany Van Delft, and Mehran all mine their personal lives, from very different perspectives. And then there’s Roadsteamer himself, who has moved from a fake-mustachioed hard rock troubadour to something closer to his everyday self with an acoustic guitar.

What they do have in common is that they all come from the Greater Boston – Allston/Brighton/Cambridge – comedy scene. “All these amazing, talented comedy acts are coming from that area,” says Roadsteamer.

If this show is successful, Roadsteamer would like to organize more of them to spotlight what he sees as underappreciated acts. He doesn’t see a place for acts like this to grow and make a living in the current club scene, and he hopes this show will help the cause.

“There is an underground scene going, but it’s always nice to see what you can do with it, and maybe you can bring it to the next level,” he says. “Maybe one day, which obviously seems like a pipe dream at this point, but maybe more comedians of this type can make a living in the area in the area they enjoy living in.”

A sampling of Festival talent.

I LOVE YOU ZAINO! You are the only other person on the planet who remembers that Andy Griffith was one brilliant funny as hell monologist. What would comedy do without you? JBaade