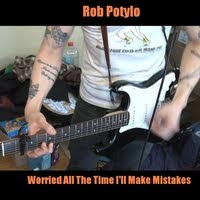 For the first time in his career, Rob Potylo is truly himself. He's no longer Robby Roadsteamer, the over-the-top rock and roll character he created for himself roughly five years ago. He's out of the comedy clubs, and tonight will play a two-hour set at Great Scott by himself, as himself, covering material from his first "solo" album, Worried All the time I'll Make Mistakes. The show starts around 8PM.

After his last project, Super Time Pilot, released an album, on Ernie Boch's label, the band imploded, and Potylo is now self-releasing albums again (visit www.roadsteamer.com for more info). And Mistakes features songs not played for laughs, which might surprise a few fans.

I caught up with Roadsteamer in the place most really big comedy interviews happen, outside of the Texas Roadhouse in Danvers on Route 1, a short walk from a Staples (one of Roadsteam-- er Potylo's former employers). He discusses the new album, his fantastic line-up of guest musicians, his webcom Quiet Desperation, and tonight's show. And if you're watching at work, turn the sound down a tad.