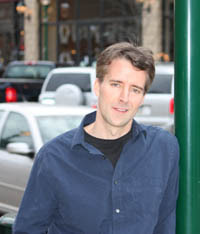 Juston McKinney started his comedy life in Boston years ago, moonlighting from his job in Maine's York County Sherrif's Department to do comedy. He eventually moved to Boston to do stand-up, before moving off to New York and L.A. Now he has a home in New Hampshire, the state where he was born, within driving distance of this weekend's gig at the Kowloon on Route 1 in Saugus (Dave Rattigan and Donny Soares are also on the bill).

McKinney maintains a high comic profile, touring with Blue Collar: The Next Generation in 2007, and until recently hosting an Sirius-XM show from his home. His new hour special, A Middle Class Hole, will debut in May or June (the date is still being worked out), and will be released shortly after that as a CD/DVD. He also plays the Palace Theatre in Manchester, NH on March 6.

A few thoughts from McKinney:

What’s the story behind the name of the special, A Middle Class Hole?

Most of the material on this special comes from my being stuck in this middle class hole, of home ownership, marriage and kids. We saved our money so we could put a down payment on a house. We bought our house in August of 2006, which we now know was the exact peak(to the month!) of the real estate market. My neighbors are in the same situation, no one can move, we live on a cul de stuck.

Do you think the material on the special will surprise people who know you mainly from the Blue Collar tour or from past Comedy Central appearances?

I don't think so. It's still pretty blue collar.

How do you feel about appearing on the Tonight Show as part of Conan O’Brien’s all too brief run?

I was happy I got to do it. I guess I'm part of a small number of comedians who have done the tonight show with both Jay Leno and Conan O'Brien. For whatever that's worth? I guess a weekend at the Kowloon!

How important is the Manchester, NH show on March 6, considering you live part time in New Hampshire? Will that feel like a home town crowd, do you think?

Everything is riding on my Manchester show, if I don't sell enough tickets I may have to put one of my boys up for adoption, I'll even throw in my wife. All kidding aside being a new Hampshire native it is always fun working in Manchester and the Palace is an awesome venue.

Does Boston feel like your comedy hometown, since that’s where you got your start?

Yes I consider Boston to be where I started. Being from New Hampshire and Maine you didn't have any places to get on stage so Stitches in Boston was the first place I ever performed....and bombed.

Will you get back to the radio show at some point?

I loved doing my weekly radio show on Sirius XM and it lasted about a year but it just got to be very time consuming. I would in the future like to do it again when I can find the time.

Do you think you’ll draw some folks from New Hampshire or Maine at the Kowloon, since it’s not far from the northern border?

Definitely a lot of my friends from up north look for a reason to hit Route 1 in Saugus because they go right by a strip club. The only question is whether they end up blowing off my show or not.
Posted by Unknown at 1:32 PM

I have just installed iStripper, so I can watch the hottest virtual strippers on my taskbar.