The Mehran Show kicks off Thursday at Mottley’s 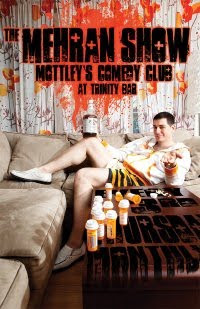 “It’s the launch show,” he says. “I wanted it to be ridiculous.”

TMS marks Mehran’s second monthly show, including Deviant, which he stages at Tommy’s Comedy Lounge. Each show will have its own identity, established both through the booking and the themes. “What I'm discovering that's different about them is that The Mehran Show will be episodic,” he says. “Each month, the show will work around a different theme. That will either be coordinated with the comics or evident in the lineup. It's really pretty self-indulgent, really, but it's the kind of show that will constantly adapt.”

“Deviant is more about the audience it's speaking to,” he adds. “It's a shore to crash on from the mainstream. Sort of a statement night about comics who are ‘different’ and who I think are amazing, in a sense presenting the possibility of being a deviant and being awesome. ‘Alternative’ feels like a vegetarian option. Deviant says ‘fuck that mainstream shit.’"

Booking is a new experience for Mehran, who now not only has to worry about his own set, but how the other comics on the bill go over, as well. That’s why he’s setting the bar high from the beginning. “The fact of the matter is that I'm not trying to foster new talent with these shows,” he says. “There are other mics for that. Neither one is an open mic or a newcomers night or an amateur night. I'm not trying to put people up who I've seen have a good night here or there. I want superstars. I want my audiences to be able to trust me that I'm not politicking or scratching backs. I'm producing a show that I feel lucky to watch.”

Mehran says he will be following his instincts, trying to find comics that audiences will remember and talk about. That may mean that good friends in the comedy community may not make the cut, a prospect Mehran admits worries him. “There's some nervousness here, because I'm an active comedian in the Boston comedy community – professionally and socially,” he says. “And so many people have been good to me.”

While Mehran expects a lot from the comics he books, he plans on holding himself to the same standard. “I'm hosting these rooms,” he says. “And I don't plan on mailing it in.”

A bit of Mehran: