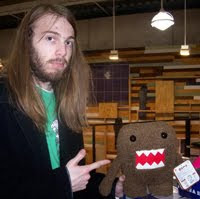 Martin Plant makes his U.S. debut with a high standard to meet. The U.K. comic points out on his MySpace page that, “I owe being able to do what I do to those who went before me, Lenny Bruce, Richard Pryor, George Carlin, and many more, and Id be an asshole if I let them down.” Plant brings his one-man show, “Leading the Horses,” to Mottley’s Saturday, his first performance in the States. I caught up with him by e-mail to ask about the show, his U.S. tour, and his influences.

How did you put together the U.S. tour?

I started out with material I knew would work internationally, topics like: People, Drinking, Laws, Religion. Things that we all deal with everyday no matter where we are from on the planet, really. Then I took a few months and looked at American life, the things that you guys go through, and wrote solidly for about 3/4 months for the material. Then over the years I've gained fans across the US so I'm taking the tour to them really, playing the big cities and places they're from.

How did you know Mottley's?

I didn't know much of Mottley's to be honest, but when I was looking for a good club in Boston, the same name kept coming up, so I got in touch with Tim (McIntire) and he has been an utter champion, he was really passionate about putting on the show and has really been working hard to get the night all up and running, promotional stuff, etc. And I'm really happy he's doing to be doing a set on the night.

What are your expectations of American audiences? Is there a specific sense of humor you associate with the States?

I've been asked this a lot, and for the most part, funny is funny wherever you go. America is different in the way that humor differs on a nearly state by state basis, what works in New York, wont go down so well in Memphis. What's hilarious in Nebraska, different again in LA. I think that in America, like most places, it boils down to whether you want to hear alternative or mainstream comedy. Sort of the HBO vs Cable argument, you either want quite safe jokes and innuendos or you want to hear a comic take on riskier things and say the word "Fuck".

Have you gotten any advice from other UK comics about trying to tour and build an audience in the U.S.?

I've had some advice from a few friends who have made the jump over here and the constant theme simple seems to be "Be Funny!" also they told me to remember to drop the "Britishisms". It's odd, but words I've said near daily for 20 odd years means nothing or something different over here. I was out having some drinks over here with a few friends and as the night wore on I said "I'm pretty pissed, so I'm gonna go home" they were trying to understand what had upset me, and "Pissed" to me means drunk.

How is "Leading the Horses" different from a typical stand-up show? What makes it a one-man show?

In my mind, the show is different because I'm trying to make a point. I'm not doing Mother-in-Law and dick jokes, I'm hoping to use humor to show what I feel are some really messed up things about the world. The title comes from the old expression, "You can lead a horse to water, but you can't make it drink" and that's what this show is, my view on the world, presented in a funny way. You may agree, you may not, but hopefully you'll laugh a lot.

You mention that you are inspired by Carlin, Pryor, and Lenny Bruce, and "I'd be an asshole if I let them down." How do you know if you're living up to that?

It's all mental as far as that goes. The thing that links them all is that they all did material that was viewed as offensive and against what people knew as safe, but when you looked at it, they were all very cleverly showing people their own pre-dispositions and hang-ups. And in the case of Lenny Bruce, he died for other comics to have the right to free speech, and I compare myself by when I get some material that touches on a subject that people may flinch at, not running from it, but making it accessible and staying true to my own vision.

Other than Pryor, Carlin, and Bruce, what comedians influenced you?

Doug Stanhope should be far more well known that he is, he's probably the best stand up working today, but because of some of his topics, he doesn't get as much exposure as he should. Lee Evans had a lot of influence on me too as he was the first comedian I went to see live and it made me want to start doing comedy myself. Eddie Izzard deserves a lot of recognition too, he is a very intelligent and funny guy who was true to himself throughout his career.

Did you see a difference between American and English comics when you were starting out?

To be honest, the amount of US comics has increased a lot, but when I was starting out, there were only the really big names that made is across the pond, Carlin, Chris Rock, Jerry Seinfeld, etc. But they were always much more confrontational, whereas British comedy was always more analytical and self deprecating.

What made you pursue comedy seriously?

I started out doing acting, and I found that I always wanted the comedy roles, and I'd ad-lib certain bits and want to re-write them to make them funnier, and I soon realized I wanted the laughs more then I wanted to be acting. And I went to a stand up show with a friend who bet me I could do it too, so I called a local comedy club and it was there I knew this was wanted to do with my life. I did many years of working a full time job then going off to gig at night and sleeping on a couch or a floor, so once I earned enough to go full time, it seemed the natural progression.
Posted by Unknown at 12:07 PM