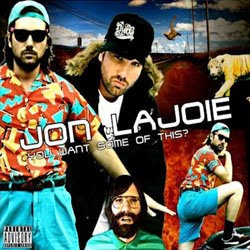 Chances are, if you know the name Jon Lajoie, you are an avid YouTube watcher and a fan of musical comedy. The Montreal native has been posting videos on since 2007, gaining enough momentum to tour Canada and now the US with his musical comedy and stand-up. “Everyday Normal Guy” has over nine million views, and he has five others that have broken the million view barrier. And he just released his first album, You Want Some of This? Not bad for a guy who posted his first video just to show his friends his music.

Lajoie is in town tonight at the Comedy Connection Wilbur Theatre, and he’ll be making the radio rounds this morning on WFNX and WBCN. I caught up with him by e-mail last night to ask a few questions.

When "Everyday Normal Guy" started getting popular on YouTube, were you already established in Canada?

No. That was only a few months into my career as a comedian (At that point, I had no idea that I'd have a career as a comedian). Funny story: I recorded "Everyday Normal Guy" a few months before I shot the video, and I wasn't even sure I was going to release it because I thought the whole "loser rapper thing" had been done to death. It was my brothers and friends that convinced me to shoot a video for it. And finally, when I shot the video, half of the footage was scrap because it was a rainy day and my friend was holding an umbrella over the camera to protect it, but, what he didn't know, was that the umbrella was in most of the shots. The video is actually a collection of shots that don't have the umbrella in them.

Did you post on YouTube as sort of an afterthought, or did you think the video could really catch on? Seems it's hard to predict, and there's a lot of competition.

I actually put them on YouTube so that I could send them to my friends. My friends didn't really like them (at least the first ones). I don't know, I kind of wanted people to come across them, but I had no idea people would react as they did. When one of my videos reached a thousand hits (about a year and a half ago) I was like "holy shit, a thousand people! That's fucked up!".

How do you play live? Is it just you and a piano or a guitar? Backing tracks?

The rap songs are just my vocal with a backing track. For the other songs, I play them acoustic. But I don't only play music.

Do you think the success of other musical comedy acts lately (Flight of the Conchords, Bo Burnham, Lonely Island) helps you, or does it just crowd the field?

Well, the beauty of it is that it's all good stuff. We're all doing the same thing in a very different way. I think it's nice. I don't think I do the same thing as Bo, The Conchords, or the Lonely Island... It's musical comedy, sure. But Nirvana is alternative rock, and so is Radiohead, and they're worlds apart. I can't believe I just made that comparison, but hey, I did.

Have you toured much in America yet? What's your sense of how well you're known here?

I've toured in the States a bit over the past 4-5 months. I'm constantly surprised by how many people actually show up. I'm always expecting 3 people to show up, but I'm always pleasantly surprised. Some towns know me more than others, but generally speaking, the shows sell out, or close to it. In Canada it's different. I just performed in Toronto for a sold-out crowd in a 1300 seater.

Do you do straight stand-up or sketch, as well?

Yes, I do stand-up and sketchy stuff. It makes up about half of my show.

How well is the album doing, as opposed to the YouTube videos? It seems an album serves a different purpose now than it may have just a few years ago, in terms of promoting yourself and reaching fans.

I didn't really write the songs with the idea that I was going to release them on an album. I just wrote them and recorded them for the videos But it just seemed like a logical idea, at this point. I gave them away on my website for about a year, and now I'm making millions of dollars selling them on iTunes. Not really. I don't even know how many I've sold yet. I should get a sales report soon. Probably 18. Big labels approached me to release it, but it just didn't make sense to me to sign with a big label. I just put it out myself.

What's the career ideal for you, as a musical comedian? Touring? More videos? A sitcom?

I want a role on Two and A Half Men! That's the goal. Maybe I can be the wacky neighbor that comes over and sings funny songs! That would be awesome. Honestly, 2 years ago I didn't even know I that I wanted to do comedy. I have no idea what I want to do. I like the live thing because it's kind of like the internet, you get to say whatever you want. TV is not like that. But it looks like maybe I'll be doing the TV thing soon. Hopefully it doesn't destroy everything that I do. But then again, I'd suck a homeless guys dick for a handful of change and a joint. Maybe I'll be on some shitty sitcom sometime soon. Who knows?

Jon was hilarious in Nashville. Watch his stuff on YouTube and then go see him live.

Yes I've seen it and it is really nice!
Todd DiRoberto
http://www.emediawire.com/releases/americansatellite/todddiroberto/emw2401714.htm