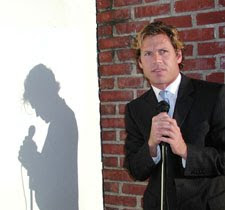 I spoke with Lee by e-mail about science, comedy, and where the two intersect.

How did you book Mottley's?

Dwight Slade, a very funny comic from Oregon, recommended I get in touch with them. I had been wanting to do a show in Boston for a while. My father went to MIT and always spoke highly of the town. He's excited that I'll be performing there.

When you were a kid, did you want to be a scientist or a comedian? Or something completely different?

When I was a child I wanted to be a test pilot. Flying through the sky in a machine no one else had ever flown; It seemed so daring and adventurous. Once I figured out those people don't live very long I decided that science seemed a lot more attractive. I could design the technology and let other people test it out. It's better to be the researcher than the guinea pig.

What drew you to biology?

I grew up playing in a river that runs through a forest. As a child I could see all the life fight for existence in that tiny slice of the world. The lizards and the insects, the cougars and the deer, the frogs and the fish all did battle. They were enemies and yet they needed each other to exist. That left a lasting impression on me. It's a perfect metaphor for the entertainment business. It's also what drew me to biology.

Have you always found science funny?

My father, an engineer, would frequently explain scientific concepts to me with funny analogies. That helped me to understand concepts without being intimidated by them. That's probably where I was first introduced to the funny side of science.

At what point did your career path change? Was there something specific that made it change?

The change came from dissatisfaction with what I was doing. I made the mistake of agreeing to do a research project in which I had no interest. My advisor convinced me it was the right thing to do for my career. I went with it. That was a HUGE mistake that cost me years of my life. Every day became a battle with boredom and I was taking a beating. I keep that in mind before I start any project now. Esther Dyson has a quote that I hold dear “Always make new mistakes”.

What draws you to comedy?

Believe it or not I think I discovered the power of comedy when I was a college exchange student in Indonesia. My research at that time involved living with a hunting and gathering tribe in the lowland rainforests of Sumatra. Needless to say there were cultural and communication barriers that were hard to get past. Everything was an issue. They were extremely confused as to why my ass was a different color than the rest of my body. Try explaining that in a language where there is no word for tan.

At first no one in the tribe liked me. The one thing I could do that would make them like me just a little was to make jokes. They thought my self deprecating humor was hysterical. It was my only weapon to get into their hearts.

Do you find any similarities between comedy and science?

Oh yeah, they are opposite sides of the same coin. Straight logic is science, twisted logic is comedy.

Any influences for combining science and comedy?

There's a lot out there from my college professors to Mark Twain but I think Norm Goldblatt deserves a special shout out. He's a physicist that has been doing science humor for decades. He has a knack for finding the funny in science and I always enjoy watching him perform.

How did you start with the PowerPoint presentations?

I did my first PowerPoint jokes during talks I would give as a graduate student. As an undergraduate I always enjoyed it when my professors would throw a gag slide into their lectures, so when I started giving talks I decided to do the same. Some people loved the jokes, others hated them. I didn't know at the time that would be the case with every joke. There is no joke that everyone likes. As a comedian you just have to get used to it.

Do you still have a day job in science?

No, I haven't had a day job in a few years now. I decided to go for it in comedy and that meant getting rid of the safety net. I wanted to push myself. I guess that's the test pilot thing coming back.

How do you overcome the limitations of doing PowerPoint presentations in your stand-up? Seems like it would be tough to work on that tight five at an open mic.

When I started at the comedy open mics I did straight stand up for a over a year before I brought the PowerPoint back into it. That happened when I found a sports bar with a comedy night. They had a better AV setup than any of the clubs. My friend Drennon Davis was using PowerPoint at that venue to do twisted children's cartoons. I tried the PowerPoint science jokes there and the audience loved it. I figured if it went over well at a sports bar it would probably go over well other places.

How do you prep an audience for science-themed comedy? Is there any assumed knowledge on their part?

Email ThisBlogThis!Share to TwitterShare to FacebookShare to Pinterest
Labels: Comedy Shows, Mottley's Comedy Club, The BC Q and A, Tim Lee

Unfortunately, among comedians it become all about the comedian and “freedom of speech”, no matter how unfunny what they have to say may be with little, if any regard for the audiences that ultimately embrace them and make them comedy stars. Again, another fine line that must be balanced.

How does that apply to Lee? Have you seen him?