The BC Q&A: Myq Kaplan 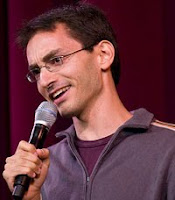 Former Boston comic Myq Kaplan will appear again tonight on NBC's Last Comic Standing, one of seven finalists. Kaplan is a smart writer, and he generally writes short material, giving him an edge in a competition where your success depends on two or two-and-a-half minute sets. And he's been on the rise for the past few years, appearing on The Tonight Show and Comedy Central, and opening for two sold out shows for Bo Burnham's Comedy Central special taping earlier this year.

I caught up with him by phone last Tuesday, the afternoon after last week's Last Comic Standing aired. [Ed note -- more of this interview will appear later today once I have transcribed it].

So what’s your schedule like these days with Last Comic Standing?

Are you still getting to play out elsewhere during the week?

Mostly I go back home to New York and do shows there, in the meantime.

I’d assume some of your time now is spent trying to drum up votes.

Yeah. Some of it is. I mean, I have fan pages and mailing lists and my family has friends that they call. Everybody, friends and family, is on board. Every week that there is a vote I try to make sure that everybody who might want to help knows.

Did you have a plan going in for that kind of thing?

I didn’t have a specific plan, other than doing what I’ve been doing, which is amassing as many fans in real life and on the computer as possible. And telling them about it. And then obviously trying to get as much of me out there so that people who don’t know me might find me.

How much of your set do we see in the final project? I’ve heard a lot of comics complain in the past that they’ve been heavily edited – you put five minutes down to two minutes, sometimes things don’t come out.

It was sort of unusual, I didn’t think of you as having to change much of anything for TV, but obviously you had to reword the gay joke a bit.

I had to do that for The Tonight Show, so I’ve had that as a TV clean version of the joke that I’m happy with.

You’re very particular about the wording of your jokes. Do you think it takes away from the impact to do that kind of joke on TV?

I wouldn’t do it if I wasn’t happy with it. There are some jokes that I have that I could change to be TV friendly that I think would lessen the impact. This is one that I don’t feel does that. In preparing for The Tonight Show I went around to a lot of – I practiced the set a lot with that wording just to make sure that it did feel right to me and got the response that I wanted it to. It passed that test to me. Audiences have been responding to it. There’s no way to test an audience with both lines, obviously, because once they’ve heard one, the other won’t have the same hold. But as far as I can tell, they both work, and I’m fine with them being interchangeable.

I feel like you’re particularly well suited for a competition like this. You have a lot of material you can parse and it’s shorter, and you can put together a two-minute set or a two-and-a-half-minute set more easily than some comics.

I feel similarly, not thinking about anybody else or comparing myself to anybody, but certainly I’ve historically written – I have a lot of shorter jokes. I’m not a lengthy storyteller in general. I enjoy storytelling. I have some jokes that are longer. Should I do three jokes that are one minute each, four jokes that are less than a minute each, or some combination thereof? I feel I do, because of that, have more options than some others.

Had you run across any of the final seven before the show? Are you familiar with any of these people?

Let me think. I did now know Filipe at all. I did know Rachel Feinstein. She lives in New York and we’ve done many shows together and are friendly. I would say she is the one I know the best. I didn’t know Jonathan Thymius. I didn’t know Mike D, even though he’s from New York. I knew who he was, I’d seen some of his stuff on TV and online. But we only met at Last Comic Standing. Tommy, same thing. I was familiar with his work but we didn’t meet until the auditions. Then there’s me, I knew me pretty well. And Roy Wood, Jr. I did know. We both did the Norfolk Great American Comedy Festival together two or three years ago.

The whole prospect is awkward in general. I think the judges do the best that they can in not making anybody feel bad, being as fair as possible, and elevating the best comedy, as far as they know and can tell. But the circumstances, they’re not natural for comedy. Comedy in its most obvious genuine form isn’t a competition. That makes for an awkward dynamic to begin with. But I think the judges have done as good a job as possible of being as honest and kind and complimentary and constructive and funny, for the most part, when possible.

But certainly somebody like Laurie Kilmartin, she came up I think with Greg Giraldo. So seeing that sort of dynamic, where they’re essentially peers, but due to these circumstances, they are not peers, in this context, that is odd.

There are a lot of comics who don’t like the show, and some portion of those comics are now posting links to vote for you after the show. That’s a strange mix, as well.

Oh sure. There are a lot of things that people have historically disliked about the show. I think the largest, most visible, was in the second season when Dan Naturman was clearly, it seems, chosen by the judges but rejected by the producers or somebody else. Which, to the show’s credit, they did air all of that. They didn’t hide it, they didn’t keep it secret. But it was what it was.

It’s not just a pure show based on merit. Obviously not every comedian is going after it. The best comedians in the country or the world, your Chris Rocks, your Seinfelds, your Brian Regans, are obviously not competing because it’s not necessary for them. So some people are like, “This isn’t finding the best comedians.” Then they’ll say it’s finding the best unknown comedians. The some people will say, “These people aren’t unknown, they have TV credits.”

An American Idol singer can never have sung in public and be great. But a person who has never performed comedy in public is, I think, much less likely to be great. So that’s more of a concern for non-comedian. The comedians understand that the people who stand in line have less of a chance of getting in. Which I think is an issue – some people are not clued in to that.

It’s very hard to explain to somebody who hasn’t followed comedy or done comedy how much of the job is just doing it. They’ll often compare it to music, like you said with American Idol. They think you can just emerge from a room after writing all of this stuff and just be consistently funny from day one.

Oh, yeah. I didn’t know anything about comedy before I did it. I watched some of it when it was on whenever I started out. Especially when the show does seem to be made in the vein of an American Idol style contest. So people outside of comedy will be like, oh, this is finding the unknown comic they way Idol does singers, finding a nobody and turning them into a somebody. But as far as comedians, I think in the past, because of that Dan Naturman situation, people grew suspicious that the show might be fixed or cast in a way that seemed unfair.

But I think they’re pretty up front, at least at the end of the shows, they do put a disclaimer across the screen that says choices are made by the judges in conjunction with NBC and the producers of the show.

It feels to me that they have the people they really want to be on there, and at these auditions, you really would have to blow them out of the water to dislodge what they wanted from the beginning.

I honestly don’t know the process that they go through. If I was chosen beforehand, I wasn’t informed about it. Back at the initial auditions, there was no guarantee. I could have done different jokes that might not have hit them as strongly. There were plenty of people they told they were funny but they didn’t think were right for the show, or right for the show now. They chose, eventually, a couple of hundred people to be in the nighttime showcases. And that was pretty much merit-based. If you did really well – obviously there’s some arbitrary nature to it, why does one good person get a spot and another person does not.

But I don’t think they said, let’s get these two hundred people, and watch them and from them, let’s get these forty people. I think you had to do well in the showcase to move on. It’s possible they might have been rooting for some people to do well. But I think something can always go wrong. The crowd could not react the way they want, they could have a lousy spot on the show. Anything could happen.
Posted by Unknown at 11:53 AM

Email ThisBlogThis!Share to TwitterShare to FacebookShare to Pinterest
Labels: last comic standing, Myq Kaplan, The BC Q and A