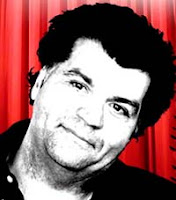 Last July, I wrote about Tony V. and Steve Calechman saving the world by answering audience questions at Mottley’s Comedy Club. Their aim tonight and tomorrow at Tommy’s Comedy Lounge is just to put on a good comedy show, with Tony V. headlining. But the two old friends have been known to take the stage together at times, and if you’re lucky, they’ll do it again this weekend.

Did they save the world last summer? Well, we’re still here, aren’t we?
Posted by Unknown at 8:59 AM