The BC Q&A: Chelsea Handler

Chelsea Handler is at the top of her game right now. She has a popular talk show, Chelsea Lately, on the E! Network, a bestselling book in Chelsea Chelsea Bang Bang (her third), and she’s playing theaters like the Wang in Boston, where she’ll be Saturday. She’s on the cover of the current Shape magazine, and was on the cover of Playboy last December. She's gotten into producing with Pretty Wild, a reality show starring Tess Taylor, Alexis Neiers and Gabriele Neiers.

There is even a stand-up tour spinoff, The Comedians of Chelsea Lately, which comes to the Comedy Connection Wilbur Theatre on June 11. (Handler also employs former Boston comic Jen Kirkman, both on camera and off, on the show).

But there are some things she doesn't have. She'd like a dolphin. And maybe a duet with Ludacris.

Handler’s latest book is another exploration into her, to put it mildly, eclectic life. She delves into her father’s poor status as a renter, her brother’s proclivity for nude swimming, her now ex-boyfriend’s search for snacks, and her own avoidance of the sun, and her childhood experience with “the feeling.” She also mentions a publication to which I frequently contribute, The Boston Globe.

Handler answered my questions by e-mail.

After having read your third book, I have to ask - is there anyone sane in your life? Everyone is either jumping in the ocean when they can't swim, obsessively searching for snacks for a helicopter ride, or crying inappropriately at romantic comedies.

I surround myself with ridiculous people so that i come out looking like the sanest one in the bunch. Besides, if I hooked up with people who didn't provide constant material in my life, what real use wood i have for them? None of them can cook.

Do you or your father still read the Boston Globe?

My father is so cheap, he doesn't read a paper unless he accidentally swipes it from one of his neighbors. If theirs is off their porch, he will go to one of my brother's or sister's homes to steal theirs.

Do you think you've exhausted your sex life in your writing? (I think you could be the slapstick Anias Nin).

Being newly single, there could be a whole new round of My Horizontal Life, but I haven't started collection research yet.

Do you think you'll ever get the dolphin you asked for in the book?

Oh, I'm gonna get that dolphin if it kills me.

Have you ever had someone quit over the office e-mail pranks? Is everyone suspicious of your e-mails now?

Everyone is not only in on the game, anyone who works in my office gets extra credit if they pull off a good email.

Does it amuse you when you wind up in the entertainment headlines with people like a certain goosestepping mistress, the same headlines you make fun of every day?

I find everything related to pop culture very amusing. Myself, included. 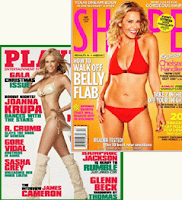 Is it intimidating or strange at all to be on the cover of magazines like Shape and Playboy?

It’s part of the whole factory, and anything that keeps me in tip-top shape is a good reminder for me to never let myself eat burgers two days in a row.

Do you feel that Chelsea Lately is the show you've always wanted it to be? I know after the first E! show, you wanted to do something a little different.

I love this show, this is my favorite book, right now everything I do seems to flow perfectly with how I wanted my life to turn out. Big and Loud.

Are you happy to see the comics on your show touring as The Comedians of Chelsea Lately now?

I am happy for any of the success of all the comedians on my show, and being able to put a tour together with them all has been a great testament to the quality of comics they all are.

How did you find Jen Kirkman for the show? She's got Boston roots.

She came in to interview as a writer, and I realized she had the perfect combination of being sane while also being insane. She's also one of the brightest in the office, which can also lead to being a little insane.

Do you have to keep your stand-up and the material you do on the show completely separate? Is a joke burned once you use it on the show?

Mostly, but there are always a few that can slide into stand-up or some of my stand-up that slides into the show. We have no major rules here, except, to show up late.

How do you approach the celebrity interview on your show? You seem to be a bit more forward with them than most hosts, as with the Justin Bieber interview.

What's your role on "Pretty Wild?"

I'm an executive producer, and trying to figure out where i'm going to donate my funds from this show, so that i can never be held responsible for the next thing they do.

Is there anything else you'd like to tackle in show business?