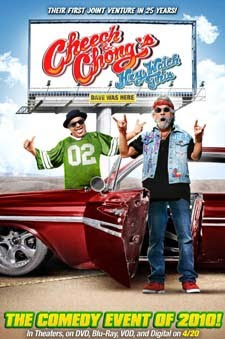 In October of 2008, I got a backstage view of Cheech and Chong’s reunion tour, their first in twenty-five years. The pair had come to the Hampton Beach Casino Ballroom, bringing back characters and scenes from their movies and albums for an audience that included fans from the old days and kids that weren’t even born yet when Things Are Tough All Over came out in 1982 (you can read the piece here).

The natural chemistry was still there, and Chong did stand-up between bits and introduced sketches. They were loose and friendly, although when I asked each of them to sign Chong’s book, Cheech & Chong: The Unauthorized Autobiography, Cheech signed it, “To Nick, ‘Mentidor,’ Cheech 08.” The closest definitions I could find for “mentidor” on the Web were “liar” or someone who had committed a breach of trust. (Chong signed first and wrote, "Read and Weep!") So there’s still a nice, sly edge to their relationship.

Tomorrow at the Brattle, everyone gets that backstage view when Cheech and Chong’s Hey Watch This comes to the Brattle Theatre in Harvard Square. The film documents the pair’s tour through 2008 and 2009. It’s a preview of sorts, since the film will be rolled out in a limited theatrical run, on DVD/Blu-Ray, on Video On Demand, and streaming through gaming systems on 4/20 (numbers of some importance to pot connoisseurs.

The movie was directed by Christian Charles, who also directed Jerry Seinfeld’s Comedian. Here’s the trailer:

This is also separate from Cheech & Chong’s Animated Movie, which still have no official release date attached. Although the trailer for that has been out since last year: