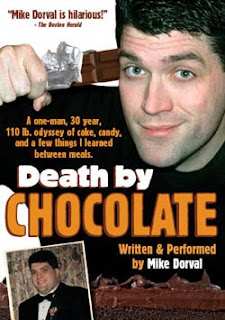 When I interviewed Mike Dorval about his Death By Chocolate one-man show for its run at Wellfleet in July, he told me he was happy to announce it was coming to the Boston Center for the Arts in November (it runs Fridays-Saturdays through December). He said then, "Who knows what can happen between August and November?" Apparently, what has happened is a change in his attitude toward the piece.

When Death By Chocolate debuted at the Boston Plyawrights' Theater in February, it was definitely a theatrical one-man show. It was a complete story, about Dorval's struggle with weight and diet, told in scenes with a definite ending.

Dorval says the show has loosened up considerably for the current production. "It's definitely funnier now as I've embraced the stand up side of my nature," he says. "Originally it still had the feeling of something of a monologue but having had the chance to be in front of so many people and interacting with them like I do in my stand up, I have a better understanding of how to relate what I have to say to other people. And I've decided its ok to include things simply because they make me laugh."

And the show may continue to change, as long as Dorval finds new places to do it. "Every night is a little different and I love going in and tweaking and helping the show grow," he says.

Dorval says he has no plans for Death By Chocolate once the current run is over, but he'd love to keep doing it, and interest in the show is growing. "I just know I want it to live on in some form or fashion," he says. "And it will."
Posted by Unknown at 11:39 PM