A second serving of Mike Dorval's Death By Chocolate 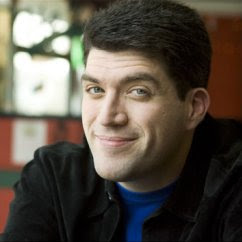 On July 21, Mike Dorval resumes the July/August run of his one-man show, Death By Chocolate, at the Harbor Stage of the Welfleet Harbor Actors Theater. I spoke to Dorval when he debuted the piece in February at the Boston Playwrights’ Theatre – you can see the video interview here. The show is personal and funny, about Dorval’s lifelong fight against food, and how he eventually won the struggle. I caught up with him again by e-mail to see what might be different as he continues to work on the piece.

How has the show changed since you debuted it in Boston?

The show is essentially the same with some edits here and there. The nice thing about the format is that I can change small things on the fly and make some additions, but I;d say the overall content is pretty much the same.

How do you approach the balance of the more dramatic personal stories versus punchlines and jokes?

That's probably the toughest balance for me, but I'm realizing that it is only difficult for me. Directly addressing the audience has such a "Stand-Up" feel that I need to remind myself that it's OK, when people go for a stretch without laughing. So far the audience has been pretty consistent in saying that's it's the right balance.

Are you still tinkering with the format?

Not really. I'm very happy with the format of the show and ending every night with a Q&A has been a big hit so far. I'm not sure what other format it might take, but if another media possibility presented itself, that would probably necessitate small adjustments.

Has doing stand-up in between affected your approach to the material?

The stand-up I've done in between hasn't necessarily influenced my approach, but my overall experience as a comic probably has. i think it's helped make me more aware of the audience and more in tune with them. it's also helped me with the tone of the show and setting a rhythm, that I can sustain.

Where will you look to bring the piece next?

As a matter of fact I just found out that I'll be doing Death by Chocolate at the Boston Center for the Arts from the week of Nov. 28th-Dec. 20! I'm very excited and can't wait to bring the show back to Boston for an extended run! And who knows what might happen between August and November?
Posted by Unknown at 12:36 PM