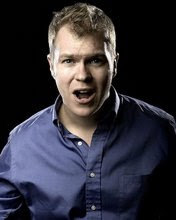 Kenny Zimlinghaus has held a variety jobs in his career. He was a producer at WFNX's morning show before he was its host (as Kenny Z) in 2003, at the tender age of 23. He once interned simultaneously for Howard Stern and Phillip Glass for a summer (he says he mainly made copies for Glass and taught him to use his cell phone). Now he's still a radio host, working in satellite radio from New York City, and a stand-up comedian. He returns to Boston Thursday night to headline Mottley's Comedy Club.

How long did you spend in Boston? Did you start doing comedy in Boston or elsewhere?

I spent three years in Boston and basically started there. My first show was in NYC but I got my start in Boston.

Any memorable gigs from your time in Boston?

There's a ton a of memorable gigs. I watched a big local name drive a joke stealer out of town at a show, by putting him in a chokehold in the green room at the Comedy Connection and i was also on stage during a huge brawl at Nick's. It's actually a better show when the audience is rioting.

Was it strange to go from interning with Howard Stern to being his competitor with a morning show at WFNX?

It wasn't strange to go from interning for Howard Stern to doing mornings at WFNX. What was strange was the morning show at WFNX.

How did your time at WFNX help you when you moved on?

WFNX helped me a bunch before moving on. Henry Santoro gave me some great advice on women and the time I spent there helped me build up a callous for just how terrible a business FM radio is.

Did you ever figure out how to balance hanging out at comedy clubs after the shows and getting up at four in the morning for a radio show?

I find the best way to balance hanging out at clubs at night and waking up early to do morning radio is to just give up on thinking you're going to ever be well rested. It never happens. It hasn't happened in 10 years for me and probably will never happen so long as I get up while its still night.

How many shows have you done in radio since you left here?

Since I left Boston: I co-hosted "The Storm and Kenny Radio Show" in Charleston SC and now I can be heard mornings on SIRIUS XM 's "Cosmo Radio" and I host two other shows. One is "Guys Uncensored" and the other is called "He Said/She said".

Do you still keep in touch with Phillip Glass?

I have visited Philip Glass' "Looking Glass Studio", where I worked. I dont talk to him that much most likely because he prob cannot use his cell phone and he could care less to talk with me I'm sure :)
Posted by Unknown at 11:44 PM