Tonight at 8PM at the CinemaSalem Cafe, we have one of the best line-ups we've had yet for FunnyGrownHere.com Presents... Discount Variety. We have the comedy of Bethany Van Delft and the music of Schooltree (Lainey Schulbaum, moonlighting from the Steamy Bohemians). Here's a bit more about them before you head out to the show. 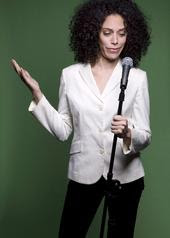 Bethany Van Delft is a rising voice in Boston comedy, and part of another regular Thursday night show -- The Dress Up show at Mottley's Comedy Club. She is also founding member of “Colorstruck: Women of Color in Comedy”, New England’s first and only women of color comedy showcase. She has been featured in the Boston Comedy Festival, New York Underground Comedy Festival, and The Greater Boston Alternative Comedy Festival. She is a core member of the touring show “5 Funny Females”. She is a favorite at clubs and colleges all over New England, and will definitely win something and/or be on TV by next year.

About 4 or 5 years seriously.

I love comedy clubs, but I also really enjoy performing at venues where you wouldn't expect to see a comedy show. I just did Middlesex Lounge, it was a great time.

I am ashamed to admit I am a little behind the times when it comes to local music. I tend to check out more music comedy like Steamy Bohemians, and MC Mr Napkins.

It's a toss up between WAR at the old House of Blues in Cambridge years ago, and The Nuyorican Soul concert at The Manhattan Center featuring all the bands from the recording, live. 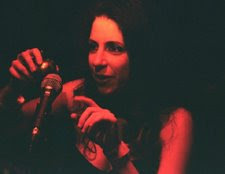 Schooltree is Lainey Schulbaum, Boston-based performer, composer, audio engineer and producer. She is one half of Boston's dubious darlings The Steamy Bohemians, and co-founder of the acclaimed variety show Jerkus Circus. This solo project is avant-pop in genre - sometimes theatrical, often odd - played with piano, voice, and drum machine. Dark story-telling and vivid imagery characterize songs about stuff like going to the moon, naughty children, premature burials, and conformity. Lainey straddles the fence between serious musician and off-the-wall comedic performer with a discomfort that both delights and confuses audiences wherever she performs.

Approximately one thousand years. Well, I'm rounding up - guess it's more like six.

I love everyone locally, especially Bethany Van Delft. Louis CK and Mike Birbiglia are a couple of my favorite non-locals.

Jerkus Circus - every single one.
Posted by Unknown at 5:04 PM