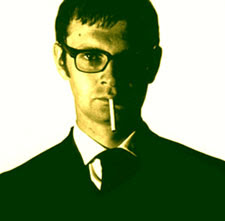 There are few things I enjoy more than finding a great comic I’ve never heard before. That’s a joy that Brian Joyce, organizer of the AltCom Festival, also shares, and he likes to pass on the experience. Joyce has gigged in extensively in Ireland and England, and he likes to bring comics to the States that Americans might not otherwise see, like Ian Moore.

Moore (not to be confused with the American musician of the same name) will be playing America for the first time tonight at the 10pm show at the Somerville Theatre, on the bill with Eugene Mirman, Rob Riggle, and the Upright Citizens Brigade. He’s also on the Jerkus Circus show at the Burren tomorrow. He has played Montreal’s Just for Laughs Festival, and is a popular headliner on the club circuit in England, where he is called a “mod” comic.

I caught up with him by e-mail while he was on his way here.

Would you approach the “mod” characterization with American audiences? I think most Americans’ experience with that begins and ends with the Who.

I don't talk about 'mod' onstage much at all. I don't dress this way to make mileage out of it, it's who I am. And don't get me started on The Who...

What’s the club scene like in England? I’ve heard a lot of American comics say they love playing there.

The scene in England, the whole of the UK and Ireland for that matter is thriving. Every city, town and sometimes village has it's own comedy night. And it's very international too, lots of Americans, Australians, Canadians etc. You can work every night if you want and because the country is so small everywhere is easily accessible. Unless you take public transport of course.

The video on your site shows a mix of social/political material (the “mongrel race” bit) and observational humor (the parenting bits). Is there any particular angle you’re looking for as a comedian, any mix of social vs observational?

It depends on the gig I'm doing, or what's happening at that time. For example if there are elections going on, I might do some political stuff. But I don't feel the need to have a 'message'. I'll make a point, but only if it's funny not just for the sake of it. I'm heading more down the anecotal route these days, must be my age.

Have you gigged with Brian Joyce before?

I worked with Brian in Dublin three years ago at The Laughter Lounge - and a lot of fun it was too!