It’s the third Thursday of May, which means www.FunnyGrownHere.com Presents… Discount Variety is up at the CinemaSalem Café tonight (start time: 8:30). This month, we have The Grownup Noise, who can fairly be called the house band for Boston comedy for their involvement with the Walsh Brothers and ImprovBoston, and Ken Reid, who has forgotten more about pop culture than the folks at Best Week Ever can hope to know, plus Robby Roadsteamer’s Quiet Desperation videos. Here’s a closer look at this month’s line-up. 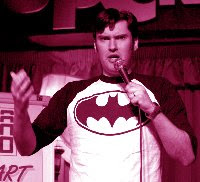 BIO: Called a “pop culture maven” by the Boston Globe, Boston native Ken Reid has been performing for over 10 years in various capacities. In 1995 he formed the seminal Boston Punk Rock group “30 Seconds Over Tokyo” at Boston’s infamous “Rat” club. Reid’s unique, and very personal story telling style has gained him a loyal fanbase in the area, and in April 2007 his first one man show “Ken Reid’s Cusack Attack” was a sold out affair at the Boston Center for the Arts. In addition Ken is a founding member of comedy troupe The Untrainables, who have been hosts of the “Great and Secret Comedy Show” at Improv Boston since March of 2007.

I was in a band when I was in high school and we were active from about 1995 - 1999 in the Boston area. For Comedy I started doing comedy when I moved back to Boston from the UK in late 2003. So about 6 years for comedy.

The Comedy Studio is usually the most consistently fun place to play. Some of the shows the Anderson Comedy kids run are fun, doing shows in non traditional venues like Rock Clubs is hit or miss, but when the shows are good, they are great. When I was doing music, i always love playing at the Rat.

I'm fairly out of touch with what's current in the Boston music scene, I kind of stopped paying attention in the late 90s. But I think Mission of Burma and the Pixies are still playing on occasion aren't they? They are some of my all time favorites. Nationally nothing new ish has really set me on fire. I think the last new band I got into was the National. All time favorites include, Prince, The Sound (easily the most underrated band of the 80s), the Afghan Whigs, and I listen to a lot of soul music.

What is the best music show you've seen?

This is tough, when I was a teenager I was out seeing music shows a minimum of three nights a week and it's all kind of a blur, but some shows that really stand out:
Nick Cave at the Roxy was great.
Mike Watt at Avalon in 95 or so with a huge band that included Dave Grohl, Eddie Veddar, Evan Dando and a bunch more in a mid 90s alt rock supergroup.
Puffy Ami-Yumi at the Paradise put on such an amazing arena level show in a smaller venue, great stuff.
Guitar Wolf and the Cramps at Avalon in 95, amazing.
Lou Barlow and the New Folk Implosion upstairs the Middle East on Halloween 2002.
The Descendents, Bouncing Souls and the Swingin' Utters at the Middle East some time in the mid 90s.
New Order for two shows at Brixton Academy in London in 01. 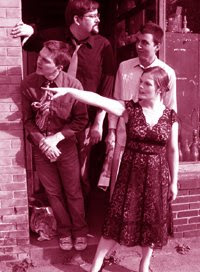 BIO: Since 2005, The Grownup Noise has been celebrated for its playful and poignant brand of indie-folk. Tasteful use of dynamics, varying instruments; including a lead cellist and unusual covers, are just part of the Grownup Noise's ever-evolving live production. All this under the comfortable blanket of simple, quality songwriting. With a true love for song, The Grownup Noise delivers melody and lyrics while conducting subtle experiments on arrangement. As goes the band's motto, "melody, melody, melody, groove, groove, melody. And maybe try to say something funny". The result: pop music, hold the cheese.

We've been fledgeling in Boston now for about 4 yrs.

The old Paradise Lounge, Lizard Lounge, Johnny D's, Mid-East. Or wherever anyone will have us.

Locally, The Walsh Bros. and many of the comedians on the old Great and Secret scene. Nationally: Katt Williams, Louis CK, Patton Oswalt.