Doug Stanhope is in it for the stories 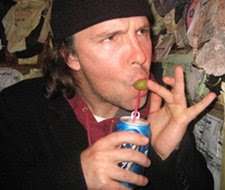 If you see Doug Stanhope after his show at the Hard Rock tonight, you may want to go easy on the small talk. The Worcester native is a congenial but curmudgeonly sort, but the things that really interest him are the horror stories, the things you’ve survived and struggled and fought through, or just the dumb stuff you did that you’re amazed you lived through. For Stanhope, what doesn’t kill him makes him stronger onstage.

A case in point, several years ago in Montreal, Stanhope was on the bill for a show called Confessing It! Most of the comics had funny stories to tell, awkward situations, social ineptitude. All of it was relatable and real in some way. But then Stanhope took the stage and told a story about his ex-wife taking an abortion pill, sparing the audience none of the gruesome details. Somehow, he made that concept, which looks horrifying to me know as I type it, funny. And extremely human, extremely flawed. And though I will never find myself on the edges that Stanhope seeks out to dangle from drunkenly laughing, somehow, the story landed.

Stanhope has been through a lot – running for president with the Libertarians last year, getting chewed up and spit out on The Man Show, and countless more personal and disturbing things. And he’ll tell you about all the fresh ones tonight. I spoke with him by phone last week as he was waiting for a plane back to Arizona, where he lives now, from a gig in Seattle. He plays the Hard Rock tonight with Sean Sullivan and Dan Crohn (Crohn also booked the show).

Are you mainly touring these days or are you looking for other things?

What’s the book about?

Basically it’ll be about my relationship with mother. And the gruesome end.

What made you decide to write that?

Well, my manager pitched it as an idea and some literary types loved it. I don’t think it’s all that interesting.

That’ll make it a little harder for you to write it, won’t it?

Yeah. But I need to challenge myself. I’m way too comfortable right now. And that’s bad for comedy. A good, contented life is the last thing a fucking great comic needs. It destroys business. Nothing will make an economic downturn of your career like comfort. Don’t you hate when you’re on your corporate-sponsored tour of stadiums and they say they’re sending a Town Car but the send a van?

All problems the working man can relate to. The van vs limo quandary.

I find myself forcing myself into uncomfortable situations where I consciously think, well, maybe I can get some material out of it. This is a really stupid idea. I don’t want to be here and I don’t like these people, but I’m not going to get any material watching the fucking DVR marathon of Celebrity Rehab.

What sort of things have you done purely for that reason?

What happened with the Libertarian presidential campaign?

Oh, Bob Barr kind of queered me off the whole fucking idea. I’m still, at heart… It’s very difficult to maintain a passion for the Libertarian party when you know the whole core of it depends on human self-reliance and self-sufficiency, and then you go, well, no, people are way too fucking stupid for that. It requires some hope for humankind and that’s very difficult to have when you’ve actually met humankind. When you fly out and see them in natural habitats and environments. Ideally, I’m still a Libertarian at heart, but I think it would fucking lead to a Mad Max world, which I’m not against.

My problem with Libertarians is usually that you get those first ten planks and you think, okay, those are all good and reasonable ideas and things that, even if I don’t agree with them, ought to be in the argument for the sake of coming to a balanced conclusion. Then you get down to those next few planks, and someone has their own agenda because they’d like to be allowed to fuck bears or something. Well, maybe not that part of it, so much.

Even in the most basic ones you have people that are Libertarian hardcore because they are zealot Christians that don’t want their children exposed to things like evolution in school. Home schooled, and have guns, and have a fucking tank on their property. Big Brother’s listening. And then you have the ones that just want to fucking legalize drugs. Just those two factions – the pro-individual freedom and the pro-get the government out of my life – those two are extreme rivals.

Obama, all this shit over taxes and the economy, none of it bothers me. None of the concerns that I have are even addressed. Overpopulation obviously being one, and I’ve fucking talked about it, and I’ll continue to repackage jokes about it for as long as I’m alive. And drugs. Six hundred thousand non-violent drug offenders in prison is as shameful as slavery. They will look back at this, if there ever is any progress in society as ashamedly as they do slavery now. You’re fucking putting people in prison where rape is so common Jay Leno can make jokes about it on late night TV. He can do rape jokes if it’s prison rape. You’re going to put this guy in jail, you know what’s going to happen to him over there…

I think a lot of people still assume that your political aspirations were a publicity stunt for comedy. And I know you have said in the past that it wasn’t.

Even at my low rung in show business, I’m still more popular than the Libertarian party. So if it was a publicity stunt for anyone it would have been them.

If you hadn’t been put off by it, what do you think you could have accomplished by taking the run right up to the election?

The idea was, my career is basically campaigning for the Libertarian party, with some fucking fist-fuck jokes mixed in. So most of my ideals are Libertarian at heart and that’s what I talk about in my act. It’s not necessarily with the message “vote Libertarian,” but the ideals are the same. I thought it could be fun. I just wasn’t good at it. The bottom line is, if I had to take the fucking stand-up comedy out of it, I’m no orator. I’m a stuttering wreck. That’s why it’s okay for people to laugh at me. If I tried to do the same thing succinctly and on message, I would suck.

Do you regret having done it or do you think it was a good experience?

You learn from every bad experience and I learned that I suck and that I’m very limited in my abilities. I learn that in different ways every day, how much I suck. Just do stand-up, buddy. Don’t try to act. Have a beer, grab a Jaeger bomb, start telling fist-fuck jokes and try to have a point every now and again.

That’ll make great copy for trying to get people out to the show. Dan will be thrilled with that.

I stand behind my stand-up. But everything else, I wouldn’t suggest. If you see me on TV, try to avoid it. It’s going to be bad.

Do you still get people from The Man Show showing up at shows, thinking that’s what they’re going to get?

The Man Show, thank god, was so bad that it was never a draw. No one ever goes, “Hey, I came out because I saw you on The Man Show.” Some people liked me as a stand-up, saw The Man Show, and stopped coming to my stand-up because of that. I’m the only guy who ever got a TV show and became less popular.

When that was canceled, I remember you were t the Comedy Connection that night, and I believe you said something to the effect of, “Great, now I can have my soul back.” Are you actively avoiding television stuff because of that experience?

Not because of that… well, sure, a lot of it is something to do with that experience. We didn’t realize how fucked up television is. You have some cursory knowledge of how little say you have with the finished product, but when you do it, you’re just awestruck at how people that have no creativity just fucking destroy things. IF you have a funny idea and you have to pass it off to the producer and they turn it over to production, and the censors and Comedy Central, and the network would have notes and the lawyers would have notes, and then it comes back and they go, okay, you can do it, but you can’t do this, this, this, this, this, and this, and you go, well, those are all the punchlines. And now it’s two days before you’re filming and you go, I can’t do that. So you have to put some absolute piece of shit second alternative on the fucking air. I’m having a hard time looking at the camera saying this, this is not fucking funny. But you have no choice, it’s not your fucking bag. I’d much rather be a drunk up on a stage in a shitty fucking roadhouse saloon in Schenectady. Because the money doesn’t fucking matter to me. What, cigarette money and booze money. The rest is just fucking numbers. I need to enjoy my day.

Are you still doing shows with the Unbookables?

No, I’m not. It never goes anywhere. They have to be so fucking micromanaged. They’re just inherently a bunch of fuck-ups. And I can’t be of two minds. I can’t produce and road manage and be funny.

I remember seeing you in Montreal at Confessing It!, a lot of people came up and told funny and charmingly embarrassing stories, and you told a story about the abortion pill that seemed to be more to the spirit of actually confessing something than anybody else did. The reaction was some laughs and some people sitting their, mouths agape, horrified. Is that the kind of moment you look for onstage?

Yeah, actually, it is. And it’s something I look for from other comedians. I like to hear shit that you don’t hear about.

What is it that you find funny about those challenging or unpleasant experiences?

That’s the shit that’s most interesting. That’s the stuff where, if someone’s not talking about that, and when they walk away from the table you go, “You know that guy’s story? He was in Vietnam and he evidently killed a bunch of kids and was prosecuted.” Why did I talk to that guy for a fucking hour about football and the weather? Those are the stories you wish people would open up with. People should be talking about their most interesting thing first and then let it boil down to small talk at the end when they’re out of shit. “Where’s my bailout, that’s my question?” That should be the last thing when you have nothing else.