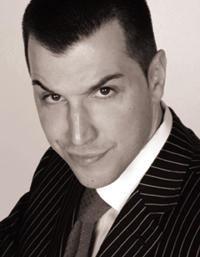 Boston’s own Tom E. Morello will receive the 2009 Comedian of the Year award at tonight’s Latin Pride National Awards at the Comedy Connection Wilbur Theatre, honored along with actor Cesar Evora and writer Laura Posada. He’s been a part of this scene for ten years now, and the honor is well-deserved.

How long have you been doing comedy in Boston?

My first stand-up set was in May of 1999 at the Comedy Studio in Harvard Square. It's technically a 10 year span, but realistically it was 4 years of messing around and 6 years of serious business.

What made you start?

I had dreamed of being a stand-up comedian since I was 8 years old, when my mom let me watch "Bill Cosby - Himself" on Cinemax. I didn't take the plunge until I was 25, because I was absolutely terrified of the Boston audiences. I would go to Nick's Comedy Stop and watch a packed house of rabid baboons jeer and heckle, and I wondered: what type of chance would I have against that? That's why the Comedy Studio is the driving force behind the resurgence of not only Boston comedy, but comedy in a general sense. It's nearly impossible to become a unique and original comedian when you're playing behind chicken wire, hoping the glass bottles being thrown don't make it through. The Studio afforded all of us the opportunity to learn in a stable and supportive environment. It has paid off in spades, when you see the sheer volume of incredibly successful performers who made their start at the Studio, under the tutelage of Rick Jenkins.

Are you doing a set tonight?

I'm either infusing my acceptance speech with some of my "greatest hits", or they'll tell me at the last minute that I'm cutting a live album because a salsa band had problems with their work visas at the airport. I honestly don't know, but I'm always prepared for anything.

Will this be the biggest audience you’ve played for?

A few years back, I opened a pair of sold-out shows for Jeff Dunham. That was about 1300 people, so this audience at the Wilbur Theatre will likely be about the same size. I'm at my most comfortable in front of large crowds. My act is broad and theatrical, I actually had to learn to dial it back so I could work in front of 8-10 people in a small club setting without blowing their ears off. I have an acting background, and always relish the chance to work a large stage without any limitations on presentation.

How did you get involved with the Latin Pride National Awards?

A couple of years ago, I was a red carpet interviewer at the Awards for Boston Latino TV, (a local Hispanic news show) and I can't say that I enjoyed my time on the opposite side of the velvet rope. I'm a terrible interviewer, because I kept wanting to ask the question, "why are you more important than me?" Last year I was at the LPNA to present an award, I sat in the orchestra pit with the celebrities and silently wondered the same thing.

How did you get the news you were Comedian of the Year? Were you surprised?

I was told that a write-in campaign led to the award. I had a large volume of friends and fans write to the producers on my behalf, and it led to them rebooting the Comedian of the Year award, (which they had actually skipped over last year.) I am always surprised at how many people are willing to go bat for me. It is humbling and heartwarming that I've been able to entertain and befriend so many wonderful folks who in turn, made this happen. I am a micro-celeb compared to the other names on the bill, and I will make the most of my opportunity.

What will you do with the award?

I'm sure my mom will find a place for it at her house, right next to Ceramic Baby Jesus and the Virgin Mary Candles, (which would be a great name for a salsa band.)
Posted by Unknown at 2:55 PM