[Note: I wrote a cover story for Friday's G section of the Boston Globe, you can read it here. Look for more in this space next week about the Festival, Bobcat Goldthwait, Tony V., and Erin Judge.] 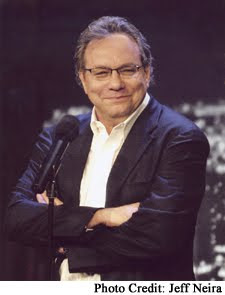 When I first saw Lewis Black in person, he was playing the Comedy Palace, part of the Grill 93 in Andover, in February of 2000. It was a weekend gig, and a snow storm had kept most people away, so there were only a handful of people in the audience – maybe twenty or twenty-five. That was also the first time I saw Boston Comedy Festival founder Jim McCue, who was middling (Dave Russo opened the show).

According to Black, that may have been the gig where he first met McCue, but he says I’ll have to ask McCue. “He keeps track of that stuff like a girl,” says Black. Despite Black’s claim, McCue doesn’t remember exactly, but places it around that time. And it turned out to be a lasting relationship.

About a year after that gig, Lewis Black happened to be in town for a corporate gig, and wound up headlining and hosting a show at the old Comedy Connection as part of the fledgling Boston Comedy Festival. McCue liked to tell the story at the time that Black charged him a hamburger for the gig. “Pretty much, it’s always been that,” says Black.

I remember sitting across from the table from Black at the Connection as he nearly coughed up a lung laughing at Larry Lee Lewis and some other local performers. “That’s the best thing about Lewis is, you can always hear him laughing,” says McCue. “A lot of comedians don’t laugh, they stare and they analyze. But he really belly laughs when he thinks something’s funny. Which is nice.”

Then in 2005, Lewis Black did the first of his headlining shows for the Festival at the Emerson Cutler-Majestic, bringing on some of his favorite comedians and hosting the show. His presence for that show and the following Festival lent the operation some credibility, according to McCue. “We were able to do those Lewis Black and Friends shows, so that opened up a lot of things,” he says.

Black is playing the Wang Theatre tonight as part of the official kick-off for the tenth edition of the Boston Comedy Festival. And his roots here go back even further than that. He remembers being in a regular revue at Harvard’s A.R.T. in the early 90s called Media Muck. Between gigs, he would get out to play anywhere he could, including Nick’s Comedy Stop, the Grill 93, and Catch A Rising star, where he played regularly once Media Much was done.

“It used to be you could just work Boston and make a living,” says Black. “And so many good comics came out of there. And my affinity to it is, I kind of feel like that’s where I came into my own.”

His schedule doesn’t permit going to see many shows these days, but back in his early days, we would catch Boston comics like Kenny Rogerson, Tony V., Don Gavin, Nick DiPaolo, and Jonathan Katz when he was in town. “I generally like Boston comedy because it’s in your face and it’s funny,” he says. “It’s just flat-out, they’re funny.”

Which is why he likes supporting the Boston Comedy Festival. “Outside of the TBS thing now, there’s so few festivals,” says Black. “Boston was the comedy Mecca for so long. It just makes sense.”
Posted by Unknown at 11:45 PM