Who Are The Whitest Kids U'Know? 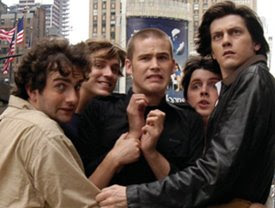 What exactly is the Whitest Kids U’Know? We know they have a TV show that airs Tuesdays at 10PM, now in its third season on IFC (the first season was on FUSE). We know they are a comedy troupe that is coming to Great Scott tonight to play a show with Anderson Comedy. Then there are the viral videos like “Hitler Rap” that spread through YouTube, and even a movie called Miss March (out March 13)written and directed by Whitest Kids Zach Cregger and Trevor Moore, who also star.

The Whitest Kids U’Know, then, is a five-person comedy troupe (rounded out by Darren Trumeter, Sam Brown, and Timmy Williams) with experience making short films and producing a weekly live sketch in New York City. Their show in IFC looks mort like a collection of short films than a traditional live sketch show. That may be splitting hairs, but it’s a distinction of which the troupe is aware.

“The funny thing is that when we first started as a troupe, we were pretty much at our very early stages, trying to make a TV show for a live show,” says Brown, a Sandwich native whose brother tends bar at Miracle of Science and the Middlesex in Cambridge. “And then eventually, once we started doing the weekly shows, we realized we’re making a live show. We started writing to that, writing stuff to work with a room. And yeah, second or third season, we had to shift our minds back to making a TV show again.”

“Sketch has changed. It’s like SNL doing ‘Digital Shorts,’” says Trumeter. “We still think of them as sketches but the format has kind of changed, because we’re not playing in front of an audience.”

Cregger, Moore and Brown all had experience with film studying at the School of Visual Arts in New York. Williams studied film at Brooklyn College, and Trumeter brought a depth of theater experience when he joined the troupe, and had also made a short film. That experience was a tremendous help when they were transitioning from the live show to television.

“Us being able to produce out own stuff is how we got going,” says Brown. “We all just knew how to edit, spoke that language of how things are laid out with cuts and things like that. We were able to speak to the finished product.”

Running a weekly live show was also a boon, giving the group a lot or material from which to create the first season. “The first season of the show, 90 percent of the sketches we had that season were written before we got the show, from doing the live show for so long,” says Brown. “The second season we had some [material] from doing stuff live. But then doing the third season was all new.”

When they started with IFC, the network told them they would have pretty much free reign for content, they took it as a challenge to push boundaries. “They really let us do whatever we want,” says Brown. “But the interesting thing is that this season, we weren’t as compelled to just push the boundaries, we were more like, all right, let’s just make the funniest stuff we can make. And it still ended up [with] more animal sex sketches than ever. Like, oh, we just are really weird people, aren’t we?”

The Kids are still waiting to hear if they will have a fourth season with IFC, and are working on a Whitest Kids movie. But in the meantime, they’re happy to be able to get back on the road and play in front of a live audience. “The tour has been amazing because we kind of threw it together last minute, and the turnout has been insane,” says Trumeter. “We had no idea that we had this many fans.”