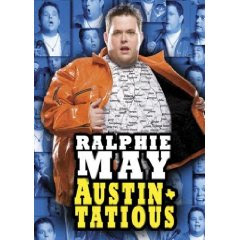 Onstage, Ralphie May is an aggressive guy. He likes the “in-your-face” approach to comedy, taking on race, talking about his wife, Lahna Turner, in a way that might earn him a continuous slapping at home if Turner were not a fellow comic. But make no mistake, May is a happy guy, and some of his best moments onstage comes when he admits that, and talks about how he would be nowhere without Turner. He’s thankful for everything he’s got – wife and kids, a good home, and a healthy career.

It’s trend that started after May got his show on Last Comic Standing in 2003, and has continued ever since (I spoke to him for the Boston Globe in 2005 about his success). He’s got four specials, including last year’s Austin-tatious, and he’s playing venues like the Berklee Performance Center, where he’ll be Saturday.

I caught up with him via e-mail this week.

When we spoke for the Globe a few years ago, you talked about how thankful you were for being able to settle into a good place to live and being in a good relationship. Did you have to recalibrate how you write comedy after that?
No, if anything it gave me more freedom to be me. I’m still just as much of a filthy, dirty animal. I still like controversial material and I still do what I think is funny.

You had a lot of fun with the birth of April June May in Austin-tatious. Should we expect similar material about August James May?

Ya know what, he’s so chill, he hasn’t really done anything yet that has surprised me. He’s an amazing baby and I haven’t done any jokes specific about him, but I know I’ll have fun with him.

In the liner notes for Austin-tatious, you thank “the angry lesbian at Starbucks that gave me a piece of her mind and listened to you” for “making me think more.” What was that conversation like?

I went into a Starbucks and she seemed mad at me and I usually don’t get that reaction. She told me that she didn’t spit in my coffee, even though she wanted to. She said she heard me on the radio that morning and I was joking that a Prius looks like a “gay” spaceship. Why is “gay” bad? I apologized to her and told her thank you for the new prospective that she was right and that I wouldn’t joke about it anymore. She said thank you she offered me a piece of lemon loaf.

Have you left Last Comic Standing behind at this point? Is it still a credit that sells tickets, or do you find you don’t need to mention it anymore?

I don’t need to mention it, but so many people fell in love with that show at that time. There was a lot going on with the war in Afghanistan and Iraq and people constantly come up to me and tell me how they loved me on that show.

Will you appear on the show when it comes back?

If they asked me to I would. I would arguably be the biggest thing they ever launched (figuratively and literally). That show gave me my start, so I would do anything I could to help them out.

What does it mean to be “politically incorrect” these days? That, to me, always seems to set up a vague sort of straw man enemy – has anyone actually tried to censor you?

The media always tries to censor me. I can’t do parts of my act due to the content and context. I’m always being told to not touch on this subject or that subject. Comedy Central took out a chunk of my act talking about dirty Chinese people. What does being “politically incorrect” mean? Just speaking about what’s on my mind and not worrying who about I’m going to offend. Just like when I talk about Tiger Woods being half Asian and half black. He hit a tree while driving in his own neighborhood, that’s the most Asian thing I’ve ever heard. How about the fact that he slept with all of those women… that’s NBA black. I didn’t make it up, I’m just pointing out the obvious.

You’ve got albums, DVD specials, and you’re playing big rooms. IS there a “next level” you’d like to reach, or are you where you dreamed you’d be someday?