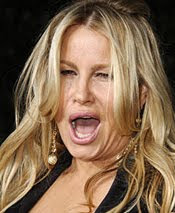 Boston native and Emerson grad Jennifer Coolidge was in town playing the Comedy Connection Wilbur Theatre on Saturday. Coolidge is an extremely talented comic actress who can turn a throwaway line into a punchline (See Best in Show, how she drags out the simple "Errm... me, too" into a bizarre rejoinder). But you can measure her stand-up career in months at this point.

I was covering another show (featuring Lynn's Sean Lynch -- stay tuned for a video interview with Lynch later this week), and I knew Brian Joyce, craetor of AltCom and co-host of the Wednesday night talk show The Whole Truth with Derek Gerry, was going. So I asked him for his thoughts. Here they are.

Coolidge did a short set - about 45 minutes - but it was packed with laughs and she left the crowd wanting more. There were a couple obligatory digs at Paris Hilton and Kim Kardashian, but for the most part she takes an absurdist approach to her storytelling, with not-so-True Hollywood stories about her long-lost scene in "Brokeback Mountain" and the time she got beat out for the role of "woman with flappy vagina" by the "girl at the bottom of the well in 'Silence of the Lambs'."

She played up the ditzy-blonde routine, but her dirty innocence and sultry theatrics make her appear genuine, even vulnerable. Some of the one-liners were a bit obvious, but her stories were funny, engaging, and ridiculous. She seemed as comfortable and confident on stage as many veteran stand-ups.
Posted by Unknown at 5:57 PM