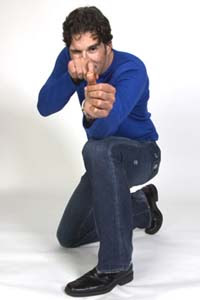 Peabody native Gary Gulman is returning to Boston again to headline the Magners Comedy Festival at Nick's Comedy Stop on Saturday. He's already sold out the 8:30PM show, so Magners has added an early show, at 6:30PM at Nick's.

See this space Wednesday for more info on Magners's stand-up competition.
Posted by Unknown at 12:06 AM