Be a part of Ryan Lee Crosby video shoot Saturday 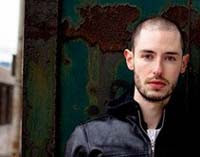 I know the banner above these posts reads “Boston Comedy,” but you will be seeing occasional posts about local music here, too. There are places where local music and comedy intertwine in an obvious way(Rob Potylo/Roadsteamer, The Steamy Bohemians, etc.), but I won’t be limiting music posts to those particular intersections.

With that in mind, I thought I’d pass along info about a video shoot happening at the Boston Boxing gym tomorrow at 5PM. Local singer/songwriter will have his band playing his song “Big Takeover” in the boxing ring, and he says, “We need folks to stand around the ring as enthusiastic spectators.” Crosby says people could expect to be there sometime between six and eight.

To hear some of Crosby’s work, including “Big Takeover,” click here. For more info about the shoot, contact Crosby at ryan@ryancrosby.com.
Posted by Unknown at 1:00 PM