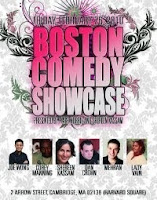 Kassam co-produced the show, inspired by a conversation with a friend who had never been to a comedy show. “I immediately started bragging about the pool of amazing, talented comics we have in the Boston area and how many of them are blowing up and moving to NYC and LA,” she says. “I convinced him that he would not be disappointed if he checked out a local comedy show, and I was right.”

Kassam and co-producer Peter Norris wanted to find Boston comedians who had already broken or were on the verge, trying to capture an audience that might not think of coming out to a comedy show. “The goal is to give the audience such a great show that they will not only remember the night and the talent, but also fall in love with comedy and become faithful patrons to the comedy scene,” says Kassam.

The plan is to host a showcase like this every month at Oberon, as Kassam points out there are many more comedians she’d like to feature. She’d like to showcase the diversity of talent Boston has to offer, something exemplified by tonight’s roster. “The comedians on the line-up are smart, funny, and hit on real things/situations that they have encountered; each of these comics pushes against the boundaries in a witty, but bright manner,” says Kassam. “This show will encourage people to feel comfortable stepping outside of what they are used to.”
Posted by Unknown at 11:07 AM