The Walsh Brothers team up with Joe Pernice 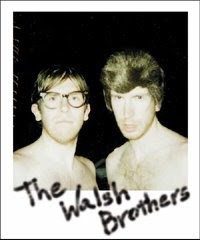 The Walsh Brothers are back in Boston tonight for two shows, opening up for Joe Pernice’s book reading/concert for his novel It Feels So Good When I Stop and the accompanying album containing Pernice’s covers of songs mentioned in the book. The Walshes have been back in the area for a few weeks, partly because Dave Walsh just got married in a ceremony out on Cape Cod.

Dave and brother Chris will perform at tonight’s show at the Brattle and then follow Pernice on a short tour, carpooling, apparently, from city to city. I spoke with Dave at one of Lynn’s best pizza places (Fauci’s, for the Lynn-curious) about the show, their new “Ramada Boys” video, and how their Great and Secret Show is fairing in Los Angeles, where they live now.

How did you get involved in opening the shows for Joe Pernice?

I have no idea. [Ashmnont Records co-owner with Pernice] Joyce Linehan contacted us and asked us if we wanted to do what she thought would be a great fit for the show, because he wrote this book. And the book is kind of this rambling novel about a guy who is trying to figure out his life and has a lot of little stories within one great narrative.

We were coming home anyway, and it’s probably something that we would have come home to do anyway. We just love performing in different endeavors like this.

Were you familiar with Joe Pernice before? Did you know the Pernice Brothers?

Yes. I didn’t know of his band before them but I knew the Pernice Brothers. I had spoken with Joyce a while ago and she gave me some PR advice that I never took and should have. We might be in a different position than opening for Joe at this time. So yeah, when I had talked to her, I checked out all of his stuff. I loved it. It’s really great. And when we heard it was him – I don’t even know much of the back story. I just know that he has a great voice and writes some incredible lyrics and the music is wonderful.

Have you gotten a chance to meet him and speak with him about this?

I haven’t yet, but every time I talk to him on the phone he calls me a homo, and so that makes me instantly comfortable. He just has this way of joking with you and just kind of berating you and telling you we’re going to have a great time on the road. I haven’t met him but I feel like I know him already, from his music… Actually his music is probably more strange than talking to him on the phone or reading the novel. Because the novel is heartbreaking like a lot of his songs, but it still has… there is a lot of joking, but there isn’t a lot of joking in his music. There is a lot of irony. And in the novel there’s a bunch of irony, but it’s very blue collar. And it’s just a little different when you talk to him on the phone. He’s just way goofier than the novel or his music. So, that’s even better. It’s like the three levels of Joe Pernice. I can’t wait to find out what it’s going to be like in the car with him traveling from gig to gig.

Is it going to be the three of you in the car?

Yeah, it’s going to be three, and then he has some kind of lady boy he travels around with who helps him out named Jose.

Some sort of “lady boy” did you say? Want to make sure I transcribe that correctly.

Would he object to being called “lady boy” in print?

He probably would because I don’t know him. But I don’t care. We’ll work it out on the ride.

That’ll be the first conversation when you get in the car.

Be careful where you sleep, I guess.

Well, that’s the thing. I think he’s a lady boy because I think I’m sleeping with him. I think that’s how it’s arranged. According to Joe. We’ll see. 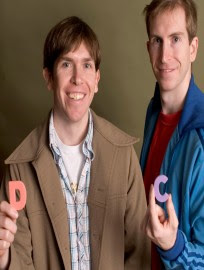 So this whole thing has nothing to do with a stage show, it’s just an elaborate, freakish thing Joe had planned.

A ruse. Yeah. A ruse to pull out my love of men dressed as women. Yeah, we’re all traveling together, just the four of us going from city to city.

What do you have planned for onstage?

Onstage? I’m not sure. Chris and I, we don’t have much planned. I don’t think I’ve seen him since the wedding, which was, what, two weeks ago. So we haven’t really talked about it. Chris might do a couple of characters. We’ve got a half [an hour]. So we’ll probably tell stories. We’ll figure it out and see what we get excited about.

Are you going to arrange that based on the book and what he’s doing at all? Or are you just doing what you do?

So how long has Ramada Boys been done?

Ramada Boys has been done for about a year. A little less, I’m being a little facetious. We filmed it in July. Sony wanted it by the end of August, maybe mid-August. Then they went through a change where they kind of combined – they had three Internet arms at one point. So they combined them all, and it kind of got lost in the shuffle. Which is fine.

What was it created for?

It was created for Crackle. But Crackle ended up merging with a couple others. And the people who were in their stronger interactive media section kind of took over Crackle. So the guy who was initially running it isn’t there anymore. So once our guy was gone, with the project, they said, oh we don’t care too much. It doesn’t have any celebrities. It seems like the money for Internet videos is becoming more and more celebrity-driven. Every time we go in an talk to somebody they say, we’re doing a lot with celebrities. And Chris and I don’t really care for that.

We did have a talk immediately after we were done and they said, who do you see involved with this if you had to get a celebrity, and we said Joe Pesci as our father, Angelo Ramada. They said that was something they’d work on. That might have been the last conversation we had with Sony about it. So they gave us the rights and stuff. I think we own it, we might own it. What’s important is we own the idea. I don’t care about the video.

Are you going to pursue it and do more with it? It would be a shame not to see HoJo III again.

Ah, yes. And the La Quinta sisters. I mean, we had thirteen episodes outlined. And we got money for two. We’re sitting on another one right now. We have it ready. But we’re going to put it out at a little later date. It’s all outlined. We were talking with other people, that’s when MySpace had some money for videos. They all had money at one point. Atom had more money. We met with all of them. And then Sony gave us the best money for the two videos, and creative freedom, which was what was necessary. I love the characters and stuff, but I think it would end up finding a home on something else we would do, as kind of an interstitial within something else we’ve done. We’ve considered so many different things for the Ramada Boys. You could talk all day about it because the concept can go practically anywhere.

The more people you can introduce Erik Charles Neilsen to, the better.

I think he’s in every idea we create, which he has been involved in. As have a lot of other people who are in our lives. Mostly from Boston. I lot of people from Boston will do our show. Whoever comes through, we put up. We work with anybody. There’s one guy, his name is Fred Young, that we all hate, who’s very funny, went to Emerson. He did stuff with [defunct sketch and stand-up revue] Zebro. He’s really great – I don’t want him to read that – who does stuff with us weekly.

Does using people from Boston, doe sthat give you some kind of continuity that you can have the confidence to do what you want to do because you know you have people who can meet your expectations?

Yeah. Essentially. We cast and work with people who we kind of know their personality a lot. So you kind of work a character around that. Everybody who’s a stand-up, they want to do more stuff but they don’t know how exactly to do characters, just sitting grabbing a slice of pizza you can kind of work out a character, outline a character with them and then say, “Hey, remember that voice you were doing? Let’s work on that voice and make him a part of our world.” Every show we’ve ever done, we try to create a world. It’s about populating that world with people. We like to populate that world with people we know.

How is the show doing at the Improv?

The show’s doing well. As a result of doing our show, we did a “best of,” and when you do a “best of” out there rather than put it up at Jimmy Tingle’s or the BCA, you put it up at the Comedy Central Stage or the UCB and all kinds of industry comes out to see you. And that’s great because it kind of culminates, you get your audience there, the people who come to see you every week anyway, and then you get to perform for people who can help you make a living for yourself in comedy. So we’ve been able to do that and we’ve gotten a lot of great response and we’ve been talking to people. It’s going well. The hardest thing is building an audience because there are so many forms of entertainment out there.

Do you think you’ll get back to Boston to perform after this show at any point in the near future?

I don’t think so. We’ll be back at Christmas. We haven’t done a theater show in a while back here. So we’re just going to come back and do a two-hour show, and do so many dates.
Posted by Unknown at 2:14 AM