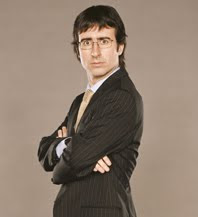 When I first spoke with The Daily Show's Senior British Correspondent John Oliver in November of 2007, the presidential election was still a year away, and the candidates were still gnashing away at each other in the debates. Oliver was the new guy on a show he’d always admired, and new to America, a country he hadn’t even visited before his TV gig here. And he was playing his first gig in Boston, at the Comedy Connection, which quit its Faneuil Hall location last year for the Wilbur Theatre.

Almost two years later, Oliver is no longer the new guy. He’s one of the best reasons to watch The Daily Show, and his stand-up special, Terrifying Times, was brilliant. He’s back at the Comedy Connection (in its new space) on Friday. I caught up with him by e-mail this week.

Have you gotten to tour around and/or visit America much since you were in Boston a couple of years ago?

Quite a lot, actually. The election last year meant that I was all over your country - from Sarah Palin rallies in Scranton to Mile High stadium for Obama's speech. I even got to shoot a piece with the Press Corps, inside the White House - and due to the fact that I was not American, had to have constant supervision wherever I went. I think as a British person they thought I might have come back to try and burn it down again.

You had said when we spoke last that it was still strange to you to be in a country where you could fly for five hours and land in the same country. Has that worn off yet?

I have pretty much got used to that now from the amount of traveling I have to do. The consequence of that is that whenever I go back to Britain, I see it as a laughably miniature excuse for a nation.

You also said you felt a little you weren't sure how you ended up with the Daily Show gig, why they were looking abroad and why they chose you. Have you settled in yet? Do you still get that feeling?

I feel very settled indeed, it's the most incredible place to work.
But I have to say, I still cannot fathom how or why I managed to end up in this situation. I still find myself walking away from work occasionally feeling like the luckiest girl in the world. That might be because I skip away from work every day dressed in a gingham dress and holding an oversized lollipop. It's just something I like to do.

I read where you have said that the Daily Show isn't a source of news, and that you and the other Daily Show folks aren't journalists. I'd have to agree how that reflects poorly on journalism as a whole, but why do you think the idea persists? Certainly comedy has functioned to inform and enlighten in the past, and your stand-up and your pieces on the Daily Show seem to function that way. Would you agree?

The persistence of the idea that The Daily Show is a key source of news, is just another example of the lazy journalism that has forced a basic cable comedy show to be mistakenly spoken about in those terms in the first place. The bottom line is that comedy has to be funny to justify it's dictionary definition. People are not going to walk away from a comedy show saying "Well, I didn't laugh much, but I feel so enlightened and informed it scarcely matters." If, as a comedian, you find yourself performing to a silent but fascinated audience, you are not doing your job. You are doing the job of a quality Chemistry teacher.

What's your sense of how America is perceived abroad since the election? Have you spent so much of your time here now that it's harder to get a sense of that?

Well, there is no doubt that the very election of Barack Obama challenged the lazy prejudices of anti-Americanism overnight. The key thing now, is for him to behave in a way which will not re-sow those seeds of resentment, and fertilize them with disappointment.

Mort Sahl said in an interview a while back that it has gotten harder to do what he does as a comedian because reality is stranger than anything he could exaggerate for effect. When you look at the birthers, town hall shoutfests, and the possible magnitude of the healthcare bill coming down the line, is it harder to make that funny?

How big is your part on Community?

Not at all big. I'll do a couple of episodes in these hiatus weeks, but that'll be it; I'm definitely not leaving The Daily Show. It's a fun thing to try, and is a nice change of pace, but I'm not interested in doing it full time. My heart, my head, and my limbs are all at The Daily Show.

What can you say about the movie deal you and Rory Albanese just signed with Paramount?

There's nothing much to say about it really. It sounds a lot more glamorous than it is. Basically, they are going to buy the next script we write. I think they are contractually bound to read it, and statistically bound not to make it. We'll see. It's something fun to do on the side of work - it's something we'd like to try to do, just to see if we're any good at it.

Is it something you will also star in?

That is very much not my decision to make. You are talking to someone with the kind of star power you would need a Hubble Telescope to detect.

Would you eventually like to segue into doing more movies and less TV?

I don't know. I love TV. More specifically, I love the TV show that I get to work for at the moment. I know that lots of people have used The Daily Show as a springboard to other work, but this kind of show is all I've ever really wanted to do. I like being afforded the opportunities to try other things around it (movies, etc) but there's never anything I want to do more than go back to The Daily Show office and attempt to trivialize the world's problems.
Posted by Unknown at 7:55 PM