Topper Carew on Why We Laugh 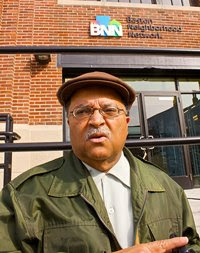 Roxbury native Topper Carew thought he might be an architect when he was younger. He even went to Howard University, and then Yale, and got his bachelors and masters in architecture. But when he started making documentary films about the subject, he found a new career. For more than twenty-five years, Carew has been writing and producing films (D.C. Cab, Talkin' Dirty After Dark, Robin Harris: We Don't Die, We Multiply) and television shows (Martin, which he co-created). He also founded Urban Neo, a label that produces films, DVDs, CDs, and books.

He's also interviewed in the new documentary, Why We Laugh: Black Comedians on Black Comedy, and he'll be on hand at today's screening of the film at the Museum of Fine Arts at 3PM, the closing film for the 11th Annual Roxbury Film Festival. You can ask your own questions at the Q&A to follow, I got to ask mine by e-mail this week.

How aware were you of some of this history – the early sitcoms, Amos & Andy, Moms Mabley – before this documentary?

I grew up in Roxbury in a home and with a family that loved laughter. And, I remember enjoying the feeling that I would get when I would make my family members laugh. So, in retrospect, I think my kinship with comedy and my gravitation to it came early in life. When I was about 6 or 7. In fact, the family would sometimes pay me to make them laugh. So when I was growing up and into my teen years, yes, me and my boys, would watch Amos and Andy regularly. And yes, I was a class clown and jokester.

And, yes I discovered Moms Mabley, and the Redd Foxx, party albums and Dolemite, and Pigmeat Marcum and Stump and Stumpy. They were all staples of the black comedy culture. And, when I could afford it, I would buy their albums and listen to them over and over again. Who they were was a part of the life that I lived, not a historical thesis.

What made you want to participate in the film?

I participated in the film because I was asked to by, Darryl Littleton, the author of the book upon which the film is based. Darryl is a friend and also a very strong comic with a very strong point of view. He would be best compared to Paul Mooney. He works as D’Militant. I like Darryl a lot, like his comedy and respect him tremendously. So, when he asked, I could only say yes. And comedy has been kind to me. I have lived it and made a living from it. So if Darryl felt that I might have something of value to say, I trusted him and was honored to be asked to participate in the project.

Was there anything in particular you wanted to say on camera for this?

Is there anyone covered in this film you feel specifically indebted to as a comedian?

I feel especially indebted to Robin Harris. I used to go and watch Robin perform/mc at the Comedy Act Theater in South Central, Los Angeles. It was the first black comedy club in the U.S. Robin was the mc. We became friends. Because of him, I got connected to the urban comedy scene in LA. Not the Hollywood/agenting scene. But, the more authentic, underground, in the hood, comedy scene. And, subsequently, my writing and producing career got reinvigorated. And, he caused me to redirect my comedic voice away from the Norman Lear sitcom approach to the “keep it real” approach. And note, I am not a comedian. I am a comedy writer, producer and director.

How important do you feel Dick Gregory was, both in terms of black comedy and in stand-up in general?

Dick Gregory was and is a truth teller. He never compromised and was never about stupid, silly, degrading content. He was the first of the black comics to offer political observation and social commentary as a comedic offering. He was a brilliant and courageous standup.

How specifically do you think people associate comedy and comedians with the history and politics of their age? It seems there’s often a vague connection when people talk about Redd Foxx, Richard Pryor, or Dick Gregory, but it almost seems like that’s more a file they put the comic in than a real connection to how a comic might synthesize and then influence current events.

I don’t think comics ignite events. Rather, comics comment on them. And thru their comic commentary and observation, people begin to drill down a little deeper into their own thinking about issues. So, what happens is this, comics teach. And people make connections, but never in an overt, politically organized kind of way. Instead, they have simply become more conscious.


Did you spend much time doing comedy when you were in Boston?

I was never a stand up. I was the class clown, and the jikester for family and friends. On the flip side, I was active in the civil rights movement, so a lot of people thought, I was this really serious person. Surprise !!! and when I was at wgbh, I did social docs and public affairs. But, when I left, I left to go to LA to write and produce comedy.

Were you aware of any racial divisions in comedy and entertainment when you were here?

In LA, you can count the number of black agents on one hand and the number of black studio and network execs on the other. And, as of late, you can count the noticeable absence of network black comedy series. I wasn’t into the comedy scene when I first lived here. So, I can’t comment on that. Now, I am back living here in Boston. When I did my Robin Harris feature doc, The Pheonix was the only one that would give it a mention. In Boston, in present day time, there seems to be a real non-connect between the black comedy scene and the media. An exception being when the comedy Connection buys ads for black headliners.

How did you feel about Robin Harris’s part in this film, considering your personal involvement in his story?

Some say that he was one of the two greatest standups who ever lived. Richard Pryor being the greatest, and Robin being the other. So, he has to be properly acknowledged. I have not seen the film, so I cannot comment about the film. But, know that because of him a new surge of urban comedy emerged and prospered. He was the impetus for the Def Jam Comedy series. And a whole lot of people got their start and launch on his stage and thru him. So, he is a saint to many of us. He connected me to Martin. Thus, the Martin Lawrence television series. Then, look at the number of comedy greats who gave testimonial to him in the film that I did about his life. Robin was a Moses who led us to the promised land.

Where does Martin fit in this history?

It’s too early to tell where Martin will fit into the overall tapestry of history. I will say this. he is one of the few comics to ever have 2 series on the air at the same time, Martin at fox and simultaneously the host of Def Jam. And, he is on of the few comics to ever sell out 5 consecutive, back to back dates at Radio City Music Hall. And, I suspect his box office cume is pretty high.

Where do you place yourself in this historic timeline of black comedy?

I may be the first indie producer of black comedy. In the late 70’s, early 80’s , I produced a tv series called The Righteous Apples for PBS. It was the first domestically produced sitcom for PBS. And I did it as an independent. When I went to LA, there was a handful of black producers. None but myself were indie. So black people in the industry refer to me as a comedy pioneer. I had to wade thru the racism. Allow me to illustrate it by telling you this. In the 80’s, I would go to meetings with white execs and see elderly black men come in, get down on their knees, and shine the execs shoes while I am in the meeting. I guess that’s part of the price we pay as a pioneer so that others might follow.
Posted by Unknown at 11:30 AM

Email ThisBlogThis!Share to TwitterShare to FacebookShare to Pinterest
Labels: Films, Topper Carew, Why We Laugh