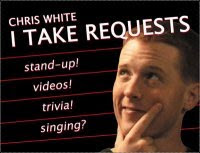 A few years ago, Washington comedian Chris White started taking requests for stand-up topics from friends, family, and his audience members. Now what started out as a dare has become a show White tours with. He builds routines around the suggestions, performs them live, and posts some of his work on his YouTube site (you can see an example below). But you can see the real thin in person at Mottley's Thursday, complete with trivia and multi-media elements, the full Chris White treatment.

How long have you been collecting topics?

Since mid-2006. Not as long as I've been involuntarily collecting racist street jokes from drunks after a normal show, but a few years now.

What gave you the idea?

As a nerd, I love homework. It was either this or grad school. Also, I'd watch a lot of stand-ups, and see them do brilliant jokes on subjects I'd never even THOUGHT about exploring. I wanted some help kick-starting my brain in new directions, and the No. 1 rule of showbusiness is "Exploit Other People."

What has been the most challenging topic?

Ancient Sumeria, as suggested by my older brother, probably as revenge for something I did wrong in a D&D game when I was 10. Comedy is about relating to ideas, and strangely enough not that many people are well-versed in Ancient Sumerian customs and lore. I blame public schools.

Are there any that just don't work?

Someone suggested "bleeding colitis," and after about two hours of thinking, I couldn't find the lighter side of massive internal bleeding and colon removal. Other topics are hard to stretch to 4 good minutes, but usually there's at least a one-liner that works.


How big a part of the act is the suggested material? Do you still
write mostly about what you want to?

I still write jokes based on my own ideas, but at an "I Take Requests"
show 80-90 percent of the stand-up started as part of a challenge. The idea is you show up, watch the show, make a challenge, and then by the next time you see me, maybe your challenge is part of the show. And then we high-five.

What is the multi-media element of the show?

It's like Laser Floyd. Bring your own dry ice! Actually, I've been working on lots of video projects and sketches over the years. None of them have kittens, however, so they aren't going "viral." But I didn't want them to go to waste, so before the stand-up, I package three or four of them together and use that to warm the crowd up. Then, at the end, I bring back the projector for the ancient Japanese art of karaoke. I have a few home-made karaoke videos that are either hilarious or disturbing, depending on who you ask.

How does the trivia work its way in? How do you make that funny?

I run a trivia night at a comedy club in DC once a month and it's one of my favorite things to do. It's just a blast. At "I Take Requests," I'll give people something to work on as they file in, then at the very start of the night we'll do a little quiz. People supply their own laughs for trivia -- there's nothing funnier than your "genius" friend coming up completely empty. It's good fun, trust me.

Have you played Boston before?

I did the comedy festival contest back-to-back years, 2004-05, I think.
And I've stopped in the Comedy Studio a few times on my way through town, or when I was visiting friends. The town has a great comedy reputation and from everything I've seen it's well deserved.

We really only have one big-time club, the DC Improv, but there are also a ton of mid-sized theater venues. So we have big names in town every week.

There are also multiple open mics almost every night of the week, when you factor in the Baltimore venues an hour up the road; with that many stages, we have a lot of very good talent developing in DC. Everyone thinks it's going to be non-stop politics on stage, but it isn't -- we leave work at work. We have to compete with all the free entertainment subsidized by American taxpayers, but other than that I think it's a really cool scene.

If anyone wants some basic info, I run dcstandup.com ... check it out and feel free to ask me anything.
Posted by Unknown at 2:53 AM