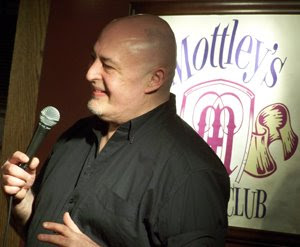 It was a busy weekend in Boston comedy with three great sold-out shows from a couple of out of town acts and a Boston treasure coming back to his old stomping grounds. Starting with Saturday and working backwards, DJ Hazard at Mottley's Comedy Club was the show to see. The club holds just shy of one hundred people, and it was packed to maximum capacity to see Hazard, who now lives in New York City.

It was a hot crowd, and they were didn't take long to warm up to Tim McIntire and Bethany Van Delft, who hosted and middled the show. Van Delft was especially on, with material about her modeling days and efforts to conceive. She mixed drier, headier material with a couple of well-placed, more graphic punchlines. Ira Proctor did a drop-in set, working on material for a tape to send to the Tonight Show. He did what you'd call an extremely tight five, talking about running to get in shape after not having done it in a while ("It's changed," he said), and the type of lazy it takes to not get off the couch, even to go to bed.

But it was Hazard's night, and he absolutely crushed. Material new and old -- a few things you'll hear on his new CD, Man of Hazardium,and a few things I'd never heard him do. He compared going on a first date to bringing your balls to the Antique Roadshow (I won't spoil the punchline for you), talked about gun violence (I'm beginning to think if more people got shot, less people would get shot"), performing on cruise ships, and a variety of topics for about an hour's set with not a single lull.

He closed with a classic Hazard tune, "Untie My Ankles," which is so far removed from the original Juice Newton song from which Hazard borrows the tune that it had no right to go over as well as it does. Attribute that to Hazard's skill at feeling out a crowd and timing a set. The song went right into his "DJ Hazard -- Nightclub Comedian" routine, wherein an animatronic DJ mouths a prerecorded message from the future. If you're a Hazard fan and haven't seen this bit, see him every time you can until he does it. It's offbeat, inventive, and it was just the right way to sign off for a well-satisfied audience.

Friday, I pulled double-duty, catching the Whitest Kids U'Know at Great Scott and the late Stephen Lynch show at the Comedy Connection Wilbur Theatre. The Whitest Kids were playing Anderson Comedy's usual Friday night show, The Gas, and sold it out about an hour before show time. They brought a mix of sketch comedy and video, material most of the audience seemed to recognize from their Tuesday night show on IFC, like the Deer Hunter sketch and "Slow Jerk" (check my interview post from earlier this week for videos of the original sketches). I spoke with Sam Brown (a Sandwich native) after the show, and him to describe what you missed if you didn't see the show.


Stpehen Lynch played two sold out shows at the Wilbur, each of them about two hours of music drawn mostly from his new album, 3 Balloons. I caught the second show, which was literally the second show of the tour, and the second time Lynch had performed this material together the way he will for the rest of the tour (he's done a bunch of the songs for one-off gigs, and you can find a few of the songs if you search YouTube). He did twelve of the fourteen songs on 3 Balloons, a few old favorites like "Special," showed a couple of video shorts, and even covered Prince. He had a bit of support from friends David Josefsberg (whom he perfomed with on Broadway doing The Wedding Singer) and Rod Cone, who helped with the banter and the background singing. For the encore, he played piano for what he said was the first time onstage in front of an audience.

I spoke with the very tired Lynch backsstage after the show about the show and the tour: