Review: Wes & Eugene's Cabinet of Wonders at the Brattle 3/26 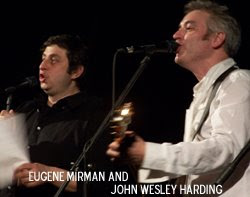 John Wesley Harding and Eugene Mirman seem like an odd pair – one is an English-born folk/rock singer and writer heavily influenced by Bob Dylan, the other is a Russian-born comedian who took his early cues from Emo Philips. But they meshed beautifully together, with the help of a few noteworthy friends, Thursday night at the Brattle Theatre in Cambridge presenting their traveling variety show, Wes & Eugene’s Cabinet of Wonders. 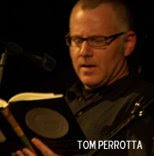 The show was both heady and silly, featuring writers Tom Perrotta, Rick Moody, and David Gates, musicians Tanya Donelly, and P.T. Walkley, poet David Daniel, and comedian Larry Murphy. Harding assembled the whole group onstage to start out, introducing each guest in a poem and setting a sort of impish tone. Everyone seemed to be enjoying themselves right from the start, ambling onto the stage looking game for whatever the show turned out to be. 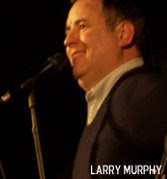 What it turned out to be was a true variety show. Mirman did a couple of sets of comedy, Harding did a couple of sets of music, drawing heavily from his new rock album, Who Was Changed and Who Was Dead. Perrotta and Moody both read pieces about food – Perrotta regarding his less than adventurous palette and Moody about how cheese equals death and is therefore eternal and indispensible. Murphy did his newbie comic character (something he’s been perfecting for years – I won’t spoil the surprise if you can see him do it).

Mirman showed a few videos and told the story of his epic battle with Delta Airlines over his lost luggage (he was eventually compensated, and used the money to buy post cards pre-addressed to Delta Airlines demanding a televised apology), and a couple of bits from his recent book tour for The Will to Whatevs. For local fans, he also brought back his spoof of the Boston.com television campaign from a couple of years ago.

But there was also a bit of mixing and matching, with Harding at the center. Moody and Gates sang harmonies with him, Walkley backed him up for a couple of tunes, and Harding even got Mirman to sing “Mrs. Robinson” with him. He accompanied Tanya Donelly, who started with a shimmering “Moon Over Boston,” a song she sang at Harding’s request (he said he had seen her do it at the Middle East years ago and loved it).

The night ended with everyone back onstage again, singing “We Are the World style,” as Harding put it, a song Harding wrote that was inspired by Eugene. I got video of this, but so as not to spoil it for those who might be catching the tour at a later date, I won’t be posting it yet.

Here are the rest of the tour dates:

brilliant call on the not sharing the grand finale! It was great stuff, but indeed it might lose something if one knew it was coming!